Our Barge is Finally All Painted!

No idea it would take THIS long to finish painting the boat.
All in all, it took 8 MONTHS!


Painting the hull went quickly back in December.
We were up in the shipyard, remember?

In Grau d'Agde, on the Mediterranean.

First: Sanding.
Then - a metal primer, since the boat is steel.
Then - 2-3 coats of paint. 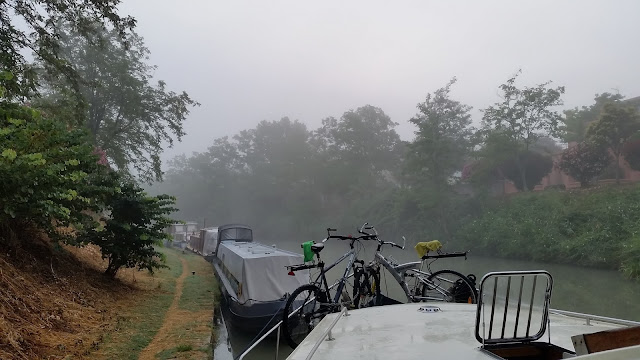 But FINALLY - this week, in JULY - it's painted.
Glad we weren't in a real hurry. 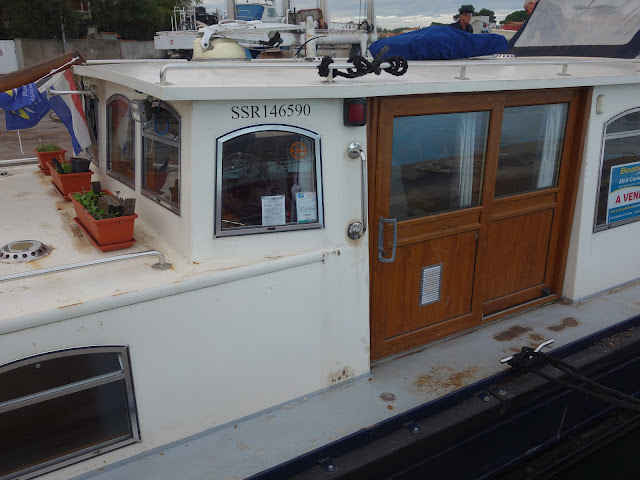 Looks like new. Shiny.
Darkened the off-white to a rich cream color.
And darkened the blue.

But stayed with traditional colors. 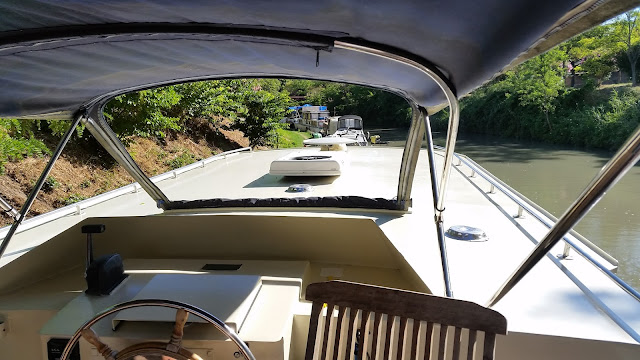 We've been "detailing" it all week.
Polishing the chrome. 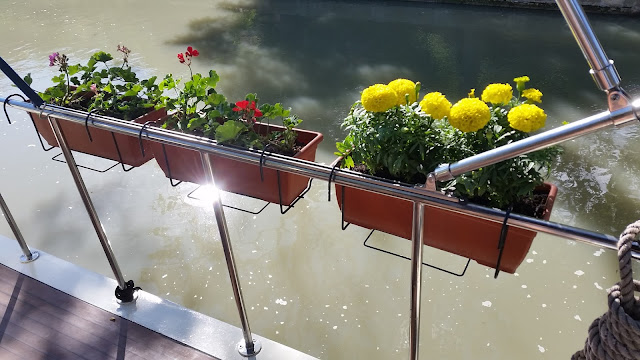 Removing paint traces from windows.
Cleaning the sides.
It's fun when it looks so good.

Found a new spot for bicycles. 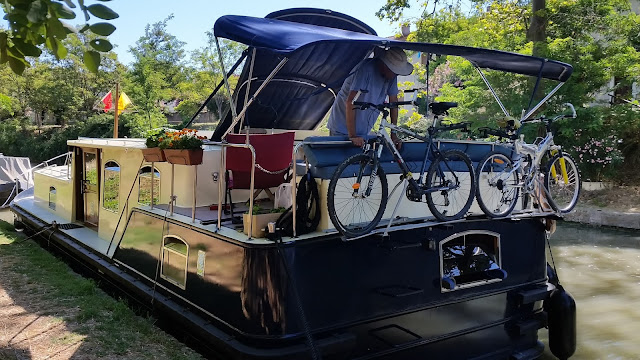 Raised the mast for the first time (it's hydraulic-!) and added the flags.

We have the Languedoc flag - the red one.
It coordinates nicely with the New Mexico flag - the yellow one.

The previous paint job was done without a primer coat.
The paint just peeled off in large strips.

And now - Stan has a new passion for keeping ducks away from the boat. 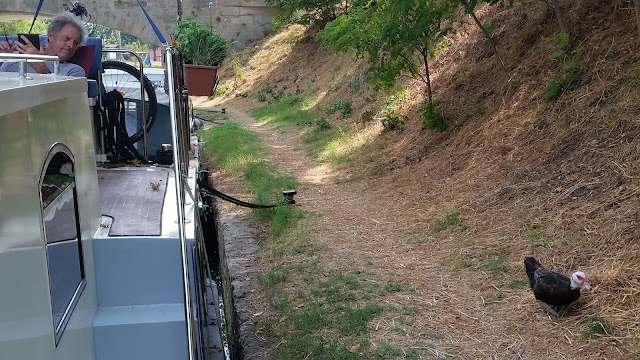 They've made themselves quite at home on some of the other boats.
Even laying large duck eggs on the deck.

And - they're a bit messy - to put it mildly.
So understandably - Stan doesn't want them around this nice clean boat.

4 comments:
Email ThisBlogThis!Share to TwitterShare to FacebookShare to Pinterest

Usually - BIRDS eat FISH.
Not the other way around.

I mentioned this in the previous blog post.
Here's the rest of the story:

It usually happens at the "lavoir", the medieval laundry area on the banks of the canal.
In the evenings.


One moment, the pigeons are peacefully taking a drink at the side of the canal.
Maybe even dipping their bird-feet into the water.

The next moment - a streak of silver, one large SPLASH - !
And - no more pigeon. 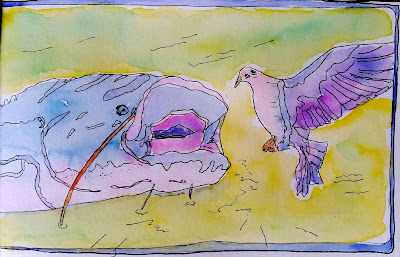 Not a feather, not a crooked birdie foot. 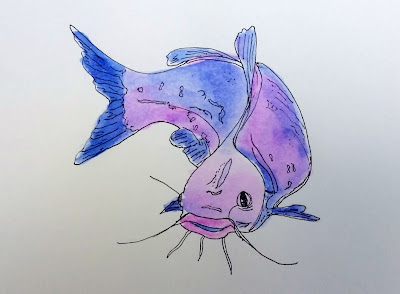 Nothing but a ripple of water.


This fish is BIG.
And really good at catching birds.

The pigeons don't stand a chance.

So we began to look into it.
Iris - visiting from Berlin with Mikey and Noah - found a video - and an explanation.


Turns out - these are large catfish, and - this is new behavior for them.

In some instances, the catfish comes entirely out of the water.

Some catfish are successful 80% of the time!
- One study at the University of Toulouse counted 52 attacks in 72 hours.

Across from us on the boat, it happens most every evening.
It's a bit disconcerting.
Sometimes we have to rescue the injured bird.

The 4 minute background video is - here
(Beware - scenes of death and violence included.)

2 comments:
Email ThisBlogThis!Share to TwitterShare to FacebookShare to Pinterest

Turns out - when the canal was built, in the 1600's, (!) they provided laundry areas, or "lavoirs" along the way, as a service to the villages.
(The villagers were cranky about the canal taking up so much valuable agricultural space.
Plus, they had to help dig the canal, whether they wanted to or not.) 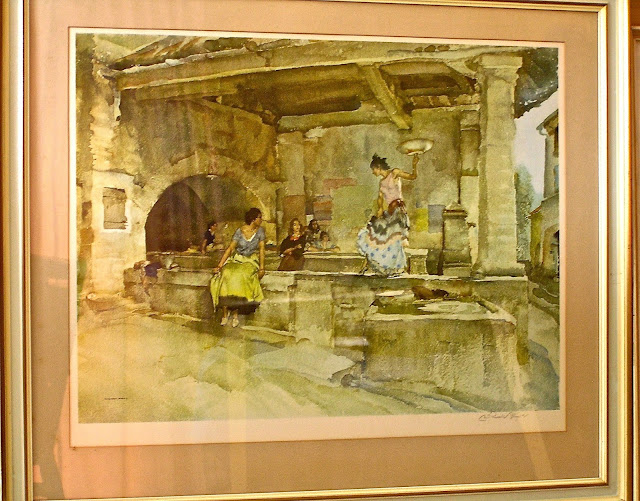 
(I might add - I have NEVER seen anyone else catch a fish here.
In spite of the number of fishermen, complete with all the latest equipment:
- boots, gear, chairs and multiple poles. Nary a fish.) 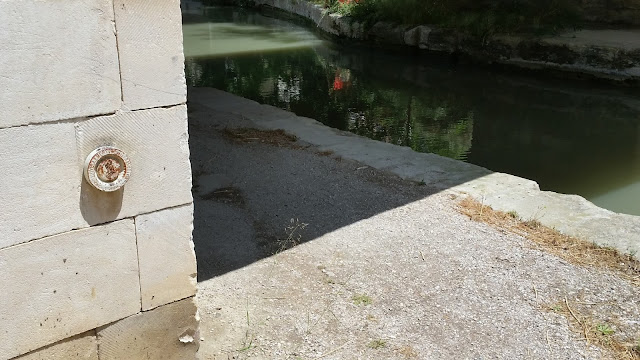 Back in the day, strangers running around with odd instruments, peering through strange eyepieces.
This was bad news. Plague, pestilence, two-headed cows - anything was possible.

The safest thing to do was - obviously - kill the mapmaker.
It took decades to complete the map.

Turns out - these round disks are survey markers - and are still there.
Mystery solved. Cool. 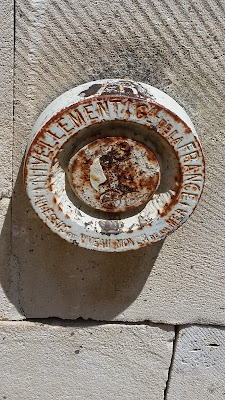 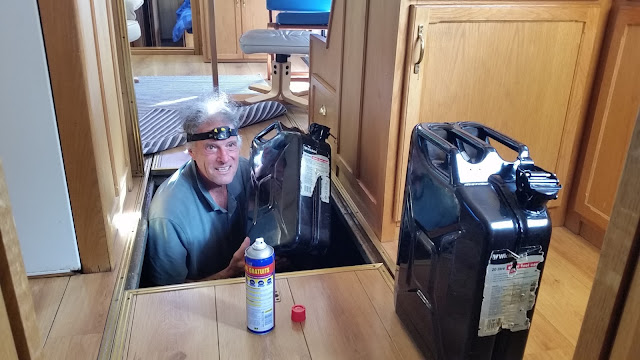 Under the floorboards, between the huge engine and the huge generator, there were 2 spiffy looking jerrycans - and a heavy duty dolly. What for?

After we owned the boat for several months, we asked:
Where the nearest fuel pumps on the canal?
The answer: There aren't any.
Really? All these boats - and no fuel pumps?
REALLY?
Pretty much - no. 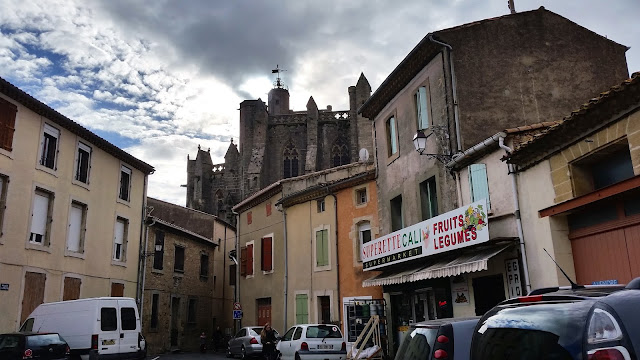 (Although we DID go up one pretty good sized mountain, and I cycled all the way to the top.
Well, actually, I took a long break or two part way up. Then cycled up the rest of the second half.
A passing Tour de France type saw me and gave me a surprised thumbs-up.) 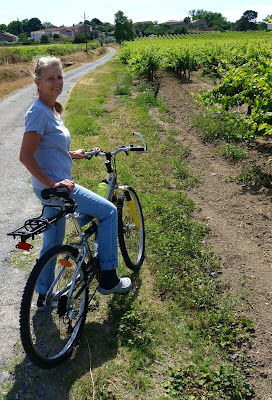 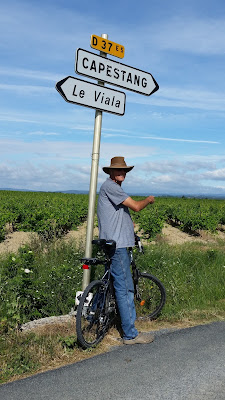 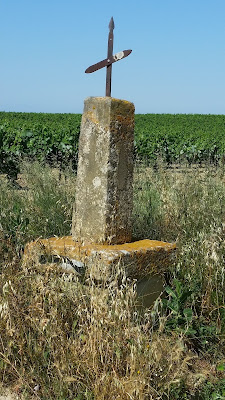 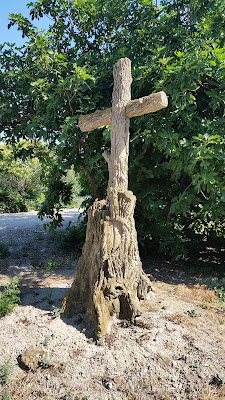 The Church used the existing sacred sites - trees, stones, menhirs - where the spirits already lived.
And simply added the crosses. 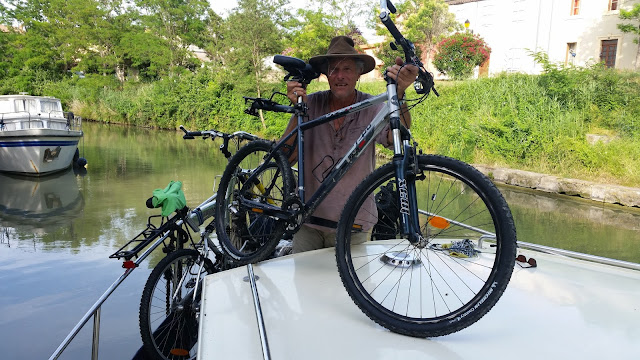 And then -- the bikes go back onto the boat.
- In just the right place - over the propane locker .
And - that's another story - until next time.

And the next mystery.