What's it Like - Living on a Canal Boat in the South of France?

If you're not used to the concept, it's kind of hard to picture it.

How do you get power?
Do you have neighbors?
Where ARE you?

What kind of boat do you have?
Do you sail all the time?

And - WHY are you there?


Why a boat?
Boats are great in some ways.
Less so in others.

A boat is easy to lock up and leave.
A turnkey operation.
Empty the fridge and go.

Since we still plan to continue to travel a lot - this is a major factor.

No house sitters. No pool service.
No tweaking the garden drip system before leaving.
No yard. No cat. 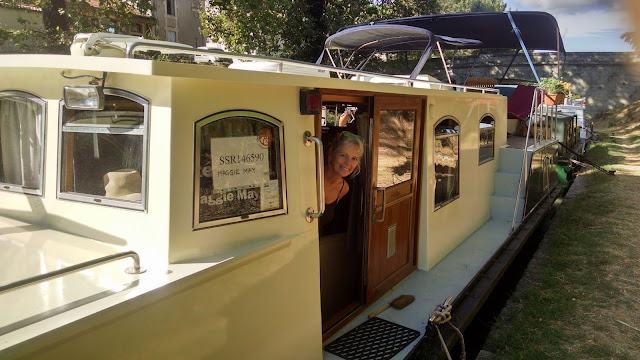 It's simple.
No utilities or property taxes.

Mooring fees are low.
Insurance isn't hard to find.
And - if you don't like your neighbors, you just loosen the ropes and - go.

You have 360° views.
From the galley and salon, we can see in all directions.
It's living outside as much as inside.

It's still a bit romantic.
The water reflections on the wood ceilings at dawn.
Fish jumping in the evening.
The sound of the ropes straining in the wind.

It's sociable.
Friends on boats.
Friends in the village. 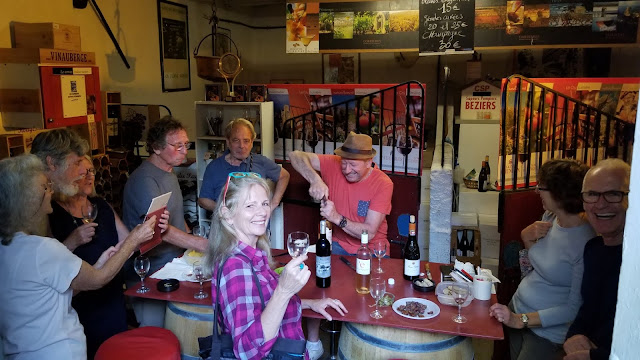 It's comfortable.
Everything has its place, and is within reach.
Having a boat prevents you from collecting too much stuff.

I even had an (almost!) self-sufficient farmhouse in the West of Ireland when I was 20.
Using solar energy is very satisfying - and surprisingly efficient.

(More about power and water - and solar panels on the boat.) 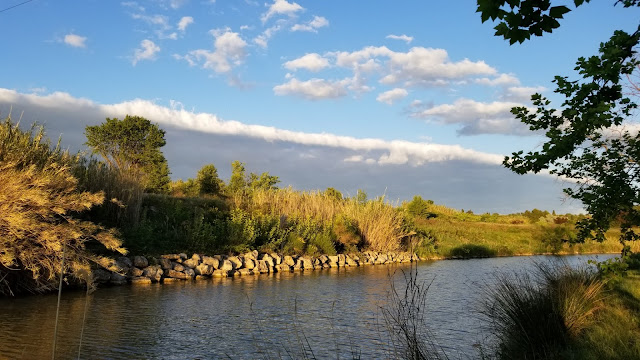 It's a handmade canal that connects the Mediterranean Sea with the Atlantic Ocean.
It's also called "The Canal Between Two Oceans".

Some odd details about the Canal du Midi here.

In theory, we could be cruising for years and never explore everything.

But - canal boating is slow.
Very slow.
Going through the hundreds of locks takes patience.

We move sometimes.
Not often.
Usually we enjoy where we're moored.

Some are sailboats.
But most are not.
Bridges on the canal are very small. Very low.

So they have to take down the mast.


A lot of canal boats are restored barges - built over 100 years ago. 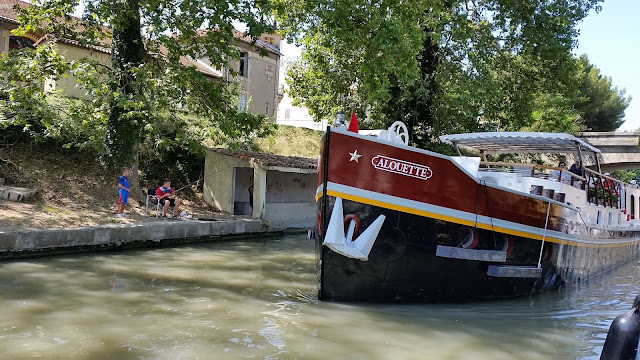 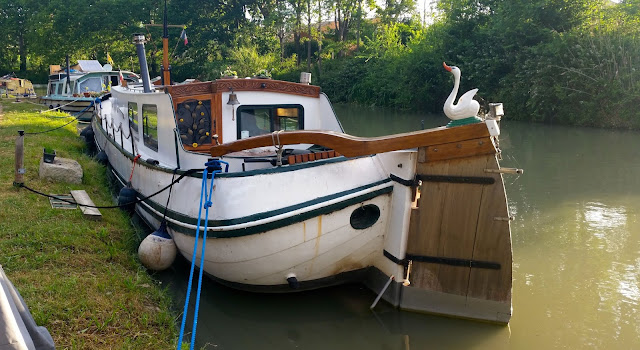 Some are fancy "Hotel Barges" that take paying guests.

Plus, there are loads of "drive-yourself" boats you can rent.
Locaboat, Le Boat, Canalous, Nichols, Minervois Cruisers.

All sizes. All prices. 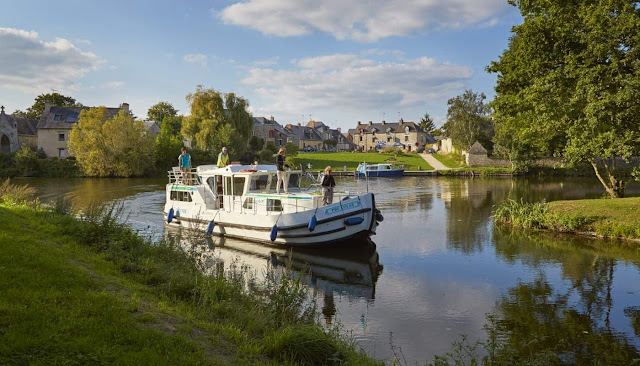 However, all over the thousands of km of canals, there are small communities of private boats. 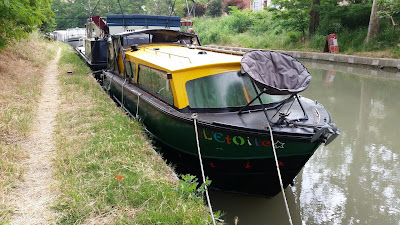 Some visit their boat for a few weeks in summer. 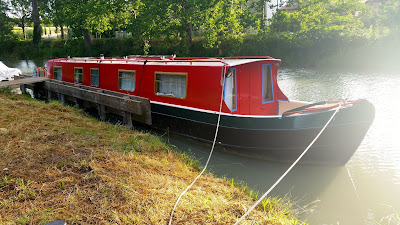 Some live all year round. 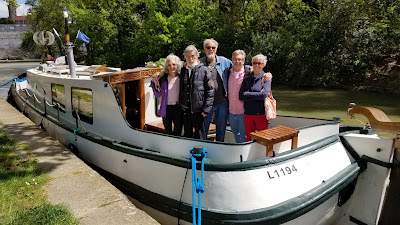 And some boats - become homes for ducks. 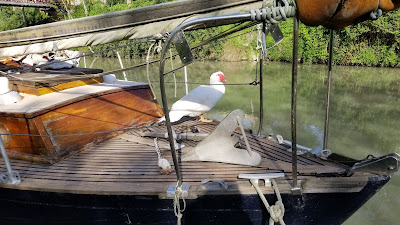 I like that the boats are all different.
Each boat has a different story.


This is our boat, Maggie May.
Built of strong Durham steel, she weighs about 25 tons. 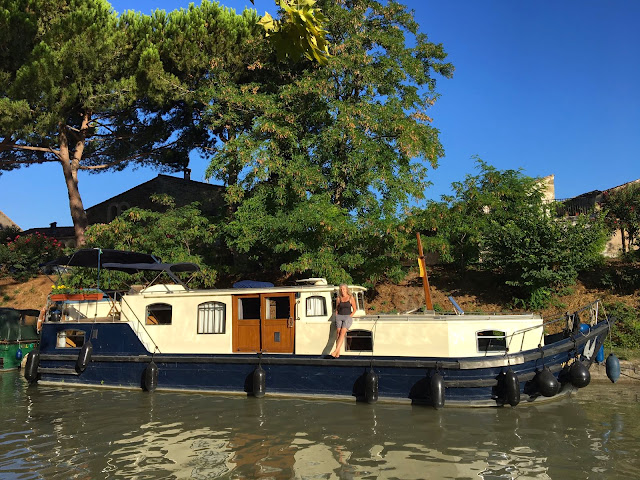 3 cabins. And 3 bathrooms, which is very unusual.
2 helms, inside and out.

But the best space is the aft deck, where we spend a LOT of time. 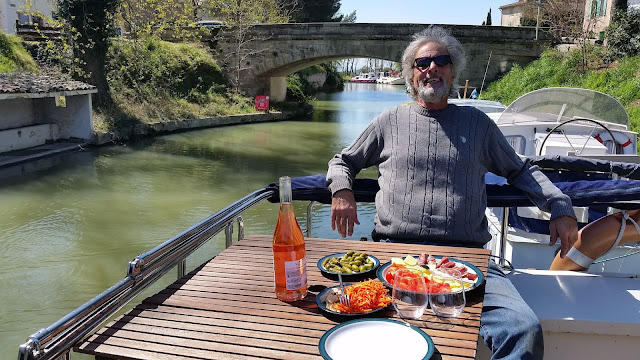 The flat bottom on Maggie May is great for canals.
On the other hand, it's not a good boat for the sea. 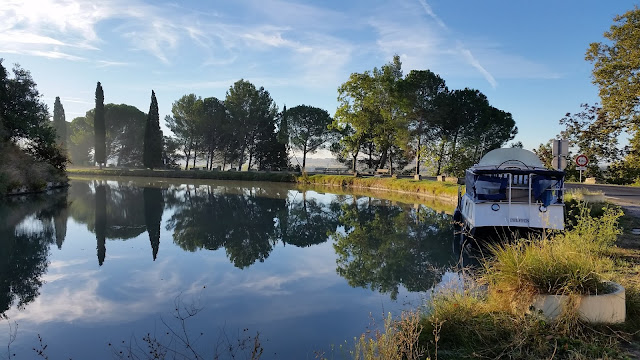 Our mooring is in Poilhés, a small French village about 2 hours north of Barcelona.

Between Montpellier and Toulouse.

Why the south of France? 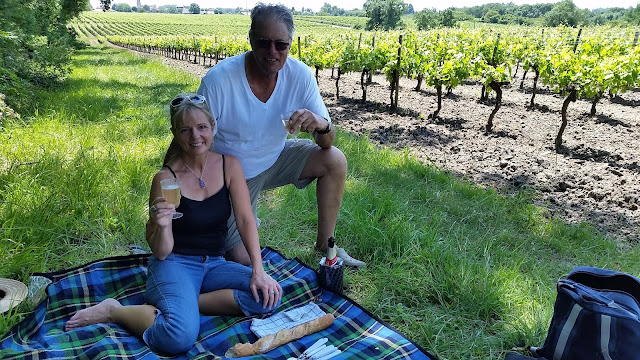 People in Europe assume it's because the weather is better.
But New Mexico has great weather.
Four seasons, dry, clear, good skiing.
And sunshine almost every day.

So why leave a comfy house, pool, garden - to live on - even a large and comfy - boat?
People assume we're "retiring" here.
But that doesn't really explain it. 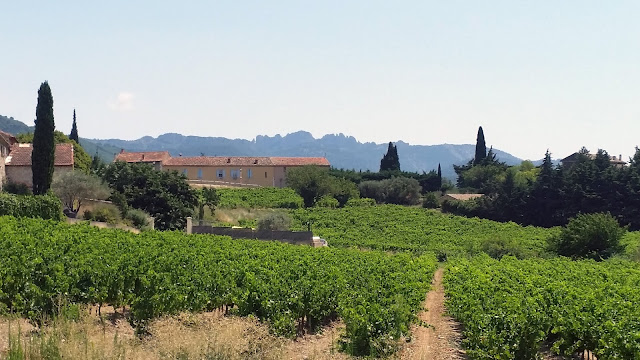 When I was younger, my motto was:
"All life is an experiment. The more you make, the better."

I wound up living and working in about a dozen countries.

Teaching helicopter maintenance in Iran.
Bush pilot in West Africa.
Airport Manager for Pan Am in Zurich. Geneva.
Ambassador's Secretary at the Japanese Embassy in Liberia.
Owning and running an international import-export company in New Mexico.
And more.

Some of those stories are in the book, "Meanwhile Back in Los Ranchos". 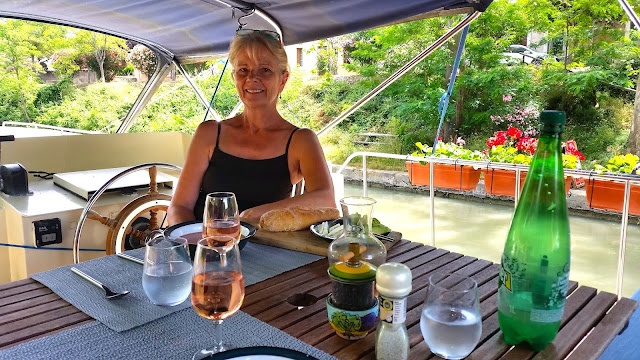 I like the idea of a base somewhere, and then exploring from there.
Learning about the region.
The people. The language, the food.

Being part of the scene.

Being "on the road" with just the backpack - is a wonderful feeling.
Having all you need in a compact little bag.
You don't really need anything more.

It makes you feel - anything is possible.
Oddly, having fewer choices - can make life feel easier.

This - Maggie May and the south of France - is a good base.
It's beautiful.
Between the Pyrenees and the Mediterranean. 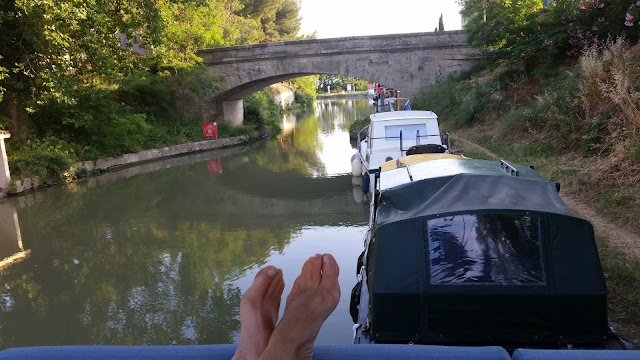 It may not be the last base.
But it's easy to close up and - go.

So - rather than being a "retirement destination", it's more of a "step along the way".
It's not necessarily a final chapter.

We could still wind up anywhere. 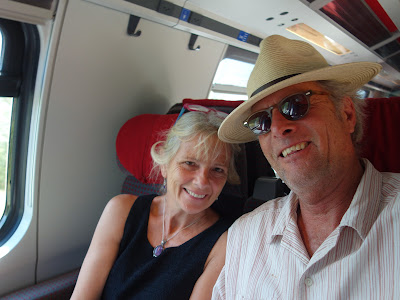 It's a continuation of an adventure that began decades ago.
Exploring the world.

Being amazed by the beauty.
Puzzled by the mysteries.
Touched by the culture.

Living each day - kind of making it up as we go along. 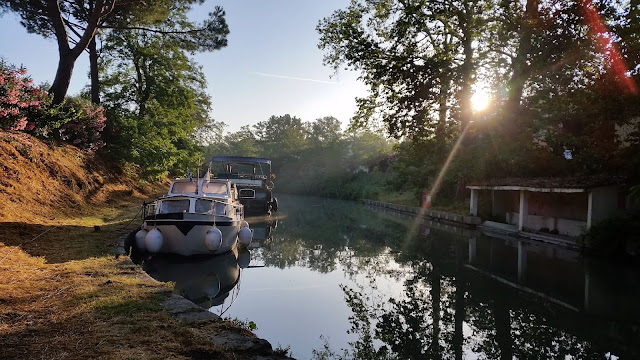