Norway. Sweden. Finland (a bit of Berlin, Denmark and Estonia)

It was a good plan.
In the hottest months of summer, we'd head far north.
- Escape the heat of southern Europe. 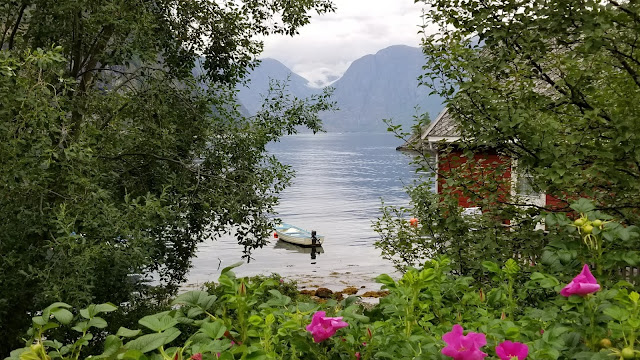 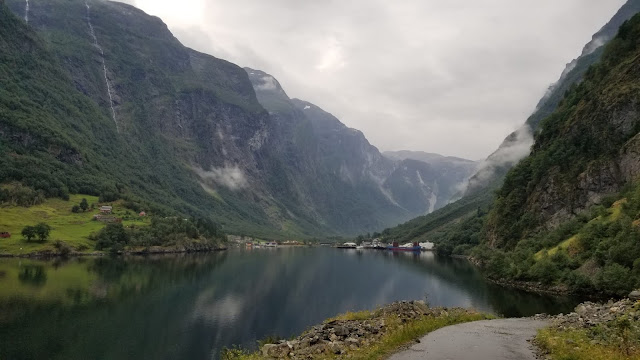 - misty mornings in a lakeside cabin - 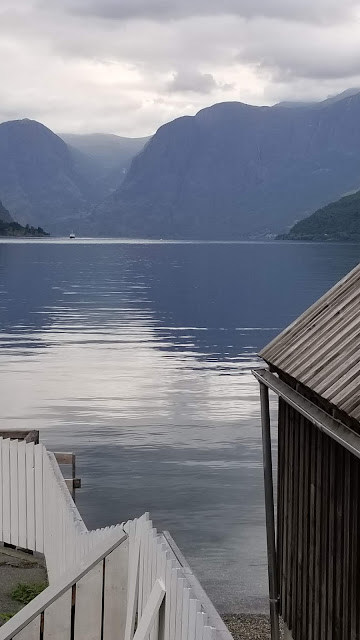 However - Europe had other plans.

Scandinavia decided to have a record heatwave.

These are countries not used to hot weather.
There's no air conditioning.

Not in hotels.
Not in trains or buses.

Usually the windows are (painfully) not even designed to open. 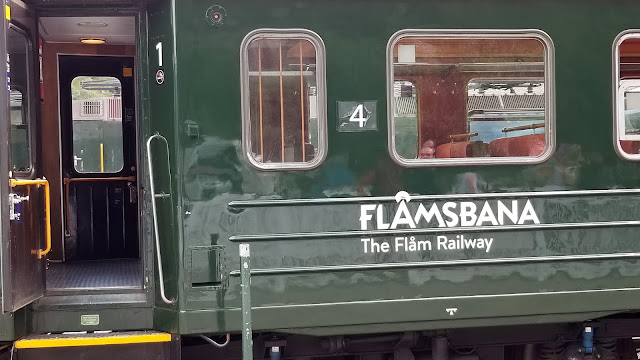 It was HOT.
And - I'm not even going to talk about the bedbugs.

With that disclaimer behind us, here's what we found:

Some things I didn't know about Scandinavia until we traveled through.
Via trains, ferries, bus, bikes, boats.

In fact, did you know they actually put WHOLE TRAINS onto a ferryboat?

And sail it across the Baltic Sea? 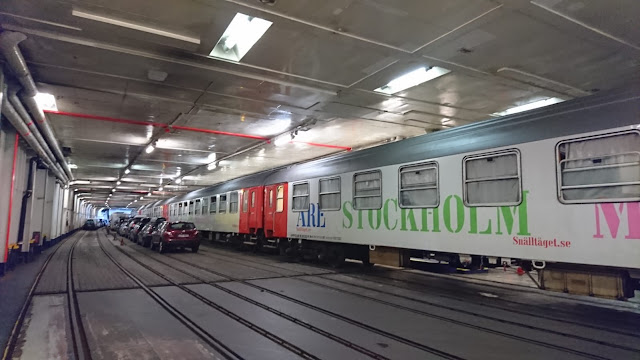 They did that for our trip from Hamburg to Copenhagen.
Son Erik said they did the same when he went from Berlin to Malmö.

That was a first for me.

Apparently, there used to be train ferries between England and France.

In the Baltic, they're still used, and quite common.
And efficient.

The whole area is so filled with water.
Lakes, seas, rivers, islands, whole archipelagos, so much water. 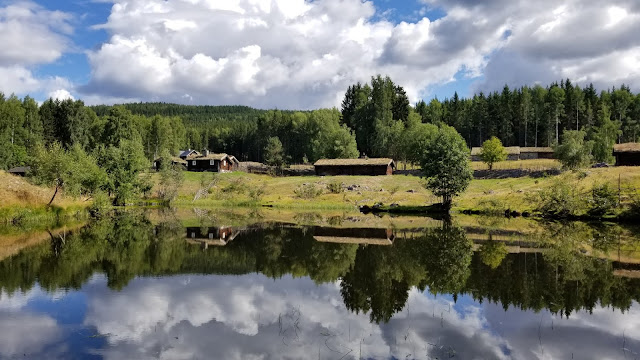 It's heaven for anyone interested in boats.
All sorts, all shapes. 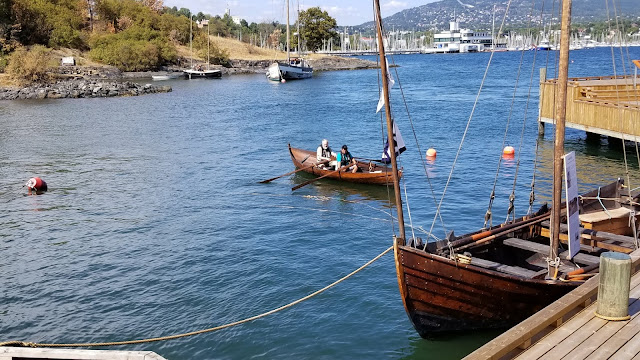 
Water taxis and ferries everywhere.
And - they're big!

I thought these were cruise ships.
No, just ferries.

In Norway, when we told the ferry captain that we lived on a boat in France, he handed the controls to us.
Let us drive the ferry down the fjord. 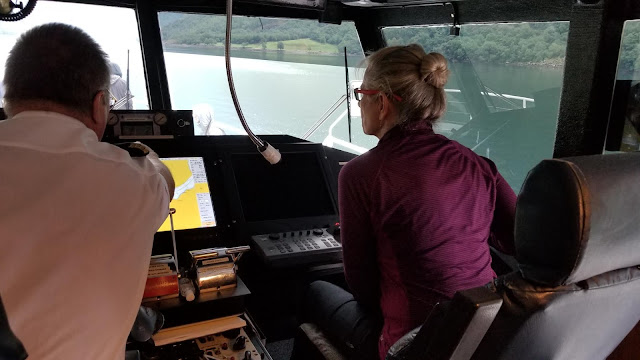 It was early morning and there weren't many passengers.
Or other ships.

How cool is that?

(Neither Stan nor I were particularly good at keeping it straight.
But there really wasn't much traffic.) 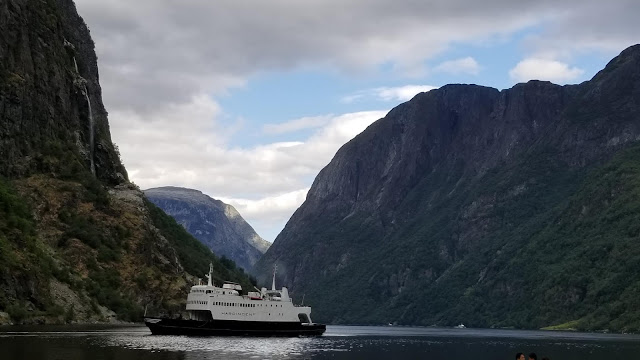 The fjords in Norway DID fulfill my image.
Misty moisty mysterious mountains tumbling into cold water .

For a few days, it was even jacket weather.

Did you know that Norway is the richest country in the world?
Unlike most places, they don't spend it.
They save it.

The sovereign wealth fund in Norway is the largest in the world.

That's not per capita.
(they only have 5 million people).

So people don't REALLY have to work.
And many don't. 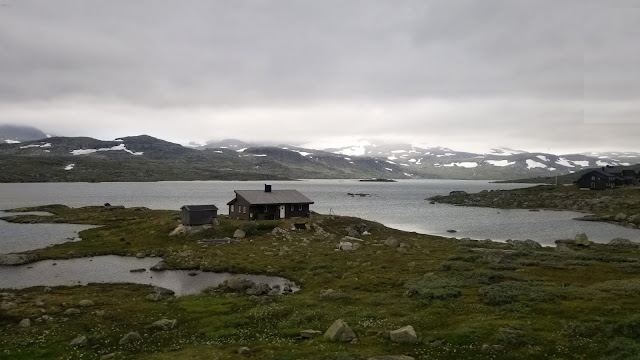 Norway itself runs almost entirely on renewable energy.
Yes, they make all their money selling oil and gas, and investing in oil exploration.

But Norway itself stays "clean".
The Norwegians seem aware of the apparent contradiction.

I asked our Norwegian friend why there weren't more people out sailing on the lakes.


It was perfect weather. Summer.
There weren't all that many boats out.


She thought about it and answered,
"I think maybe we have too many lakes for not enough people."

At one point, we rented bicycles in the Swedish lake district.
(Yes, more lakes. More water.)

Farms and fields and the usual Swedish red houses.
It felt like a Carl Larsson painting.

There were wild blueberries to pick.

Which - wound up mysteriously - on my birthday pie!

Other than blueberries, the best meal anywhere in Scandinavia is easy:
Salmon.
Smoked salmon.
Salmon steaks. 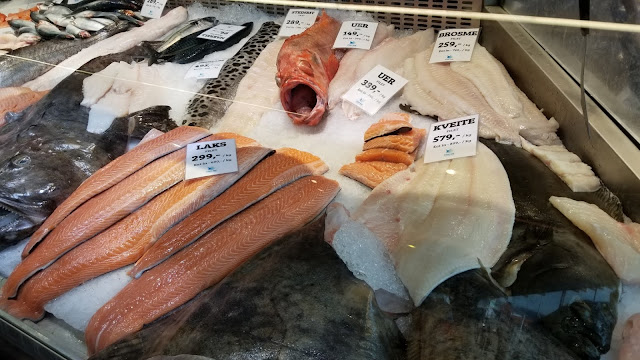 Other fish too.
(although burgers were oddly popular-)

But - the salmon was exceptional.
On one day, I had salmon for all 3 meals.

Just so you know:
If there is bread and salmon at a Swedish buffet,
the salmon always goes on the white bread.
Not the rye.

(-There are a lot of unwritten rules in Sweden.) 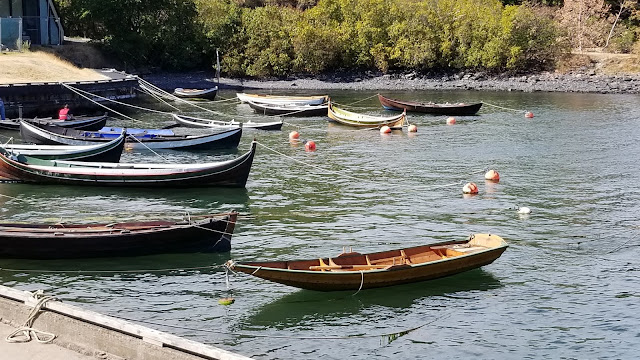 Alcohol is government controlled.
It can only be sold in government-approved stores.
It's surprisingly expensive.

But sometimes an exception can be made for beer.
- Not that anyone goes overboard...

(Now that I live on a boat, that expression finally makes perfect sense.) 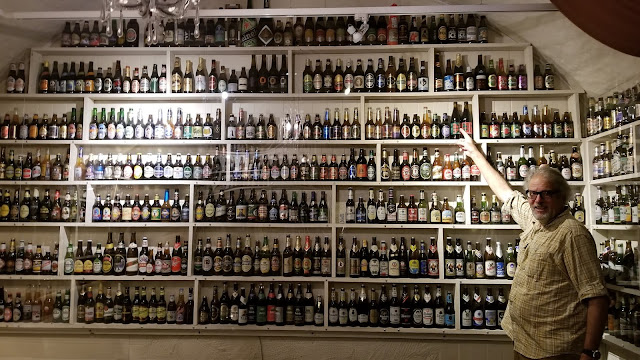 Did you know - you have to wait for your host to lift his/her glass to say Skøl before you can drink?

And - you NEVER clink glasses when you toast in Scandinavia.

It's just - not done.
Another unwritten rule. 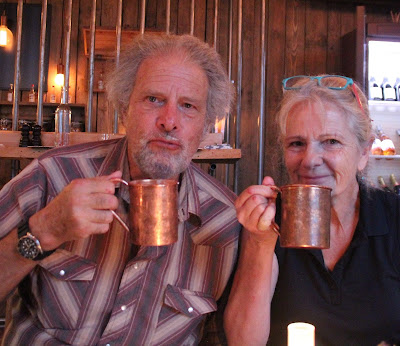 Outside Stockholm there are over 30,000 islands.

The ferry from Stockholm to Helsinki or Tallinn takes 3 hours to sail through them.
3 hours! A huge ferry!
That's a LOT of islands.

I had rented a small wooden house on one of the islands for a week.
A tiny house.
A tiny island.

With a tiny dock and a tiny rowboat.

Next door, a tiny old Swedish woman who had grown up on the island.

She spoke with such a wonderful lilting accent.
A bit like the Swedish chef on the Muppets. 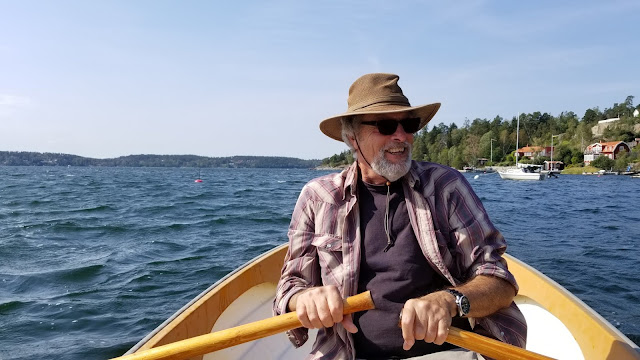 The Swedes are big on equality.
But - some of the houses on this island were sure a lot more "equal" than other places we'd seen!


Everything manicured and perfect.
And splendidly beautiful. 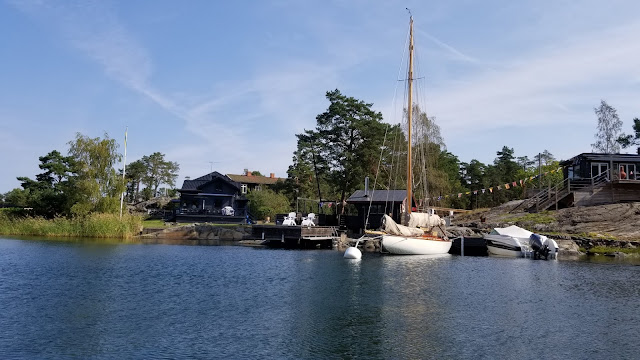 Everyone with a boat.
Or three.
Just 40 minutes from Stockholm.

For us, our "tiny house with a dock" was just perfect. 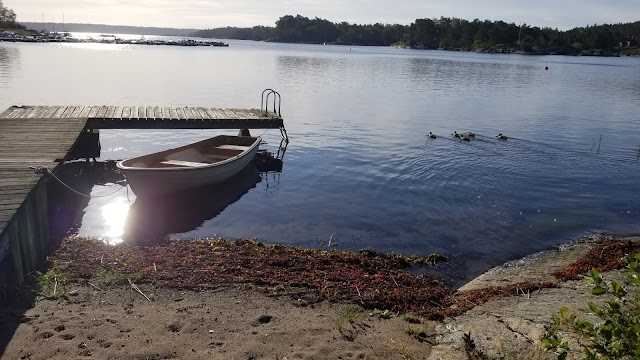 Another thing I hadn't considered when making these plans for Scandinavia.
Cruise ships.

Apparently, cruise ships are VERY popular here.
Since it's a very pricey part of the world, being on a cruise ship is a good way to control costs.

However, these huge ships even come up the fjords to tiny towns.


There were cruise ships in every port.

In the mornings (and in evenings) the streets were ours.


But - by 10 am, the cruise crowds arrived.
And the streets were packed.

On the subject of Finland:

Did you know the most famous Finn seems to be a small fat creature called a Moomin?
I read Moomin stories to the kids when they were small.


Also, I thought that this particular restaurant chain must be very popular.
There were so many with the same name in Helsinki!

Then I figured out that "Ravintola" means "restaurant".
Oops.

A couple other things I learned:
The Norwegians are proud of their heritage as fishermen and farmers.

(and maybe a few proud Vikings)

They enjoy the folk-tales and old stories.
Traditional costumes. 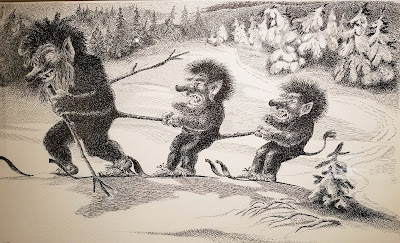 The Swedes, in comparison, think it's mildly embarrassing.
They prefer being modern.


(By the way, did you know that "Bluetooth" was named for a Viking?
King Harald Bluetooth. 980 AD)

However, Estonia is just a 2 hour ferry away.
And in Estonia, alcohol is cheap.


So - the ferries run often.
And there is a LOT of serious drinking.


In Tallinn, drinking locales go all night.
They promote themselves as "where parties go to die".

(which I THINK is supposed to mean "party heaven")

In Helsinki, all the signs are in Finnish.
And in Swedish.

But - Finnish is related to Hungarian.
Go figure.

Apparently, among Scandinavians, the Danes are considered the Wild Bunch:
companies hire Danes to come in if there is restructuring to be done-!


Speaking of Mikey, did I mention we started the trip in Berlin? 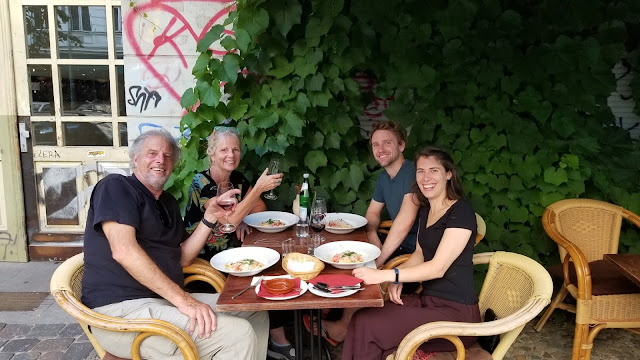 And ended it - back in France.