Solar Panels on the Boat - And they're GREAT!

We finally got solar panels on the boat!

Look at the setup - doesn't it look totally streamlined?
Like the system came with the boat originally? 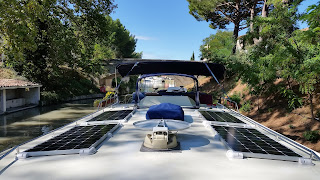 We thought we'd be drilling all sorts of holes through the roof.
- Cables all over the interior.

But no - it looks GREAT.

This is the first time either Stan or I have had a solar energy system.
SOLAR!
We've both been interested in solar energy over the years - since the late 60's, really.
The ol' Whole Earth Catalog and all that.
For one reason or another, it was never practical.

But: it works SO well.
Everyone should be using solar energy!
It's awesome!
Ok, well, everyone on a boat, at least.

It took us a long time to figure out what we needed.
How it would work.

We were starting from scratch.

I wanted to understand it thoroughly.
All these diagrams and watts and amps and volts.

One of the technicians - the agent from Viktron - said it succinctly:
"A solar power system is a balance - between production - storage - and - usage."

That's it in a nutshell.

We had to figure out what our requirements are.
We had no idea, really.

- How many amp hours does the fridge use?
- What's the wattage on a laptop?
- Are ALL the cabin lights LED?

Then - how to run the cables invisibly - from the roof of the boat - to the battery bank in the engine room? Since the carpentry on the boat is particularly tight, and has no visible nails or screws - this wasn't easy.

Here are the technical details of our system:

4 solar panels of 150 W each.
They fit nicely on the roof.
Enough space for us to walk between them. We already have 3 12-volt house batteries of 125 amp hours each on the boat.

These new solar panels are really efficient.
They don't have to be angled to follow the sun's path.
They work even when it's pretty shady, or when part of the panels are covered.

And on the first day, we were TOTALLY charged up - by 9 am.
In the morning. -Wow.

So now - we can charge the computers, phones.
We can run the fridge.
(we've been turning it off every night-)

And still - the batteries are charged higher than we've been able to get them all summer.
This is incredible.
Without running the generator or the engine.
Or having to plug in to shore power.

So - the system is working better than we expected.
(If you live in a house, connected to 220v, this may not seem like such a big deal.
On a boat, it really IS a big deal!)

You know...the boat also has a second fridge. For - wine?
We haven't turned it on yet.
Up until now, one small fridge has totally depleted our batteries every night.

But now - who knows?
A little luxury?

That second fridge...?
We may be able to use it. 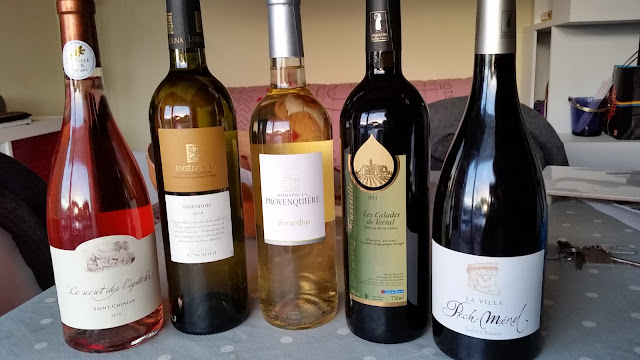