Canal du Midi Odyssey - Taking Maggie May out for a Cruise 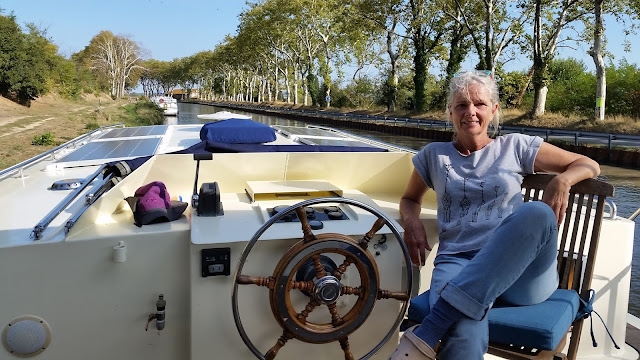 September! It's cooler.
Time to take Maggie May out for a REAL trip on the canals - and see how she does. 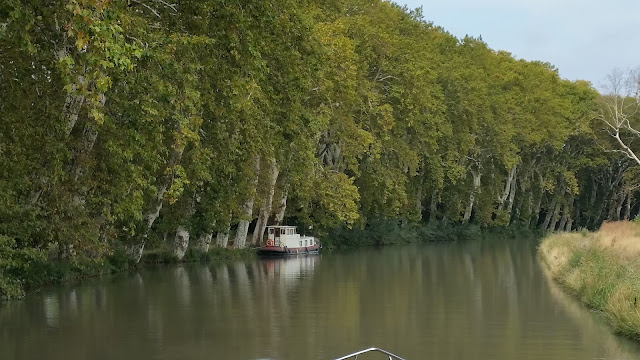 However, we were both mildly terrified at the thought.
Suppose we ran into one of THESE as we were trying to negotiate our way through a narrow port? 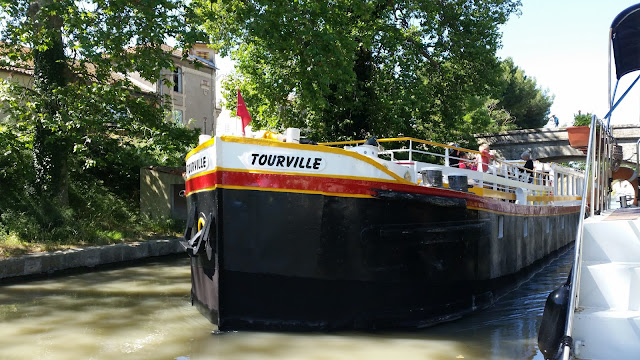 Or what if we met one under a bridge?
Clearly, THOSE boats have priority. 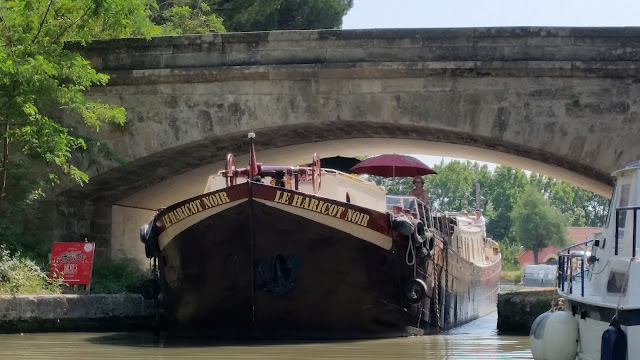 Would we be able to handle a boat of 25 TONS - with water and fuel - through all the twisty bends of the canals, squeeze precisely into locks with other boats, slide easily through crowded towns - with some degree of expertise? After all, Maggie May doesn't exactly turn on a dime. 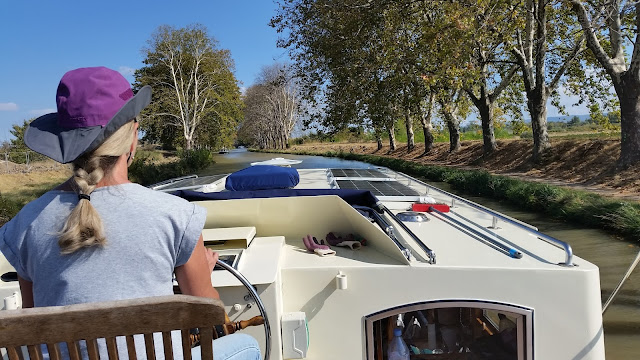 We stowed the bicycles and the extra fenders.
Cleaned up the lines and checked everything. Twice.
Heart hammering just a little bit - off we went. 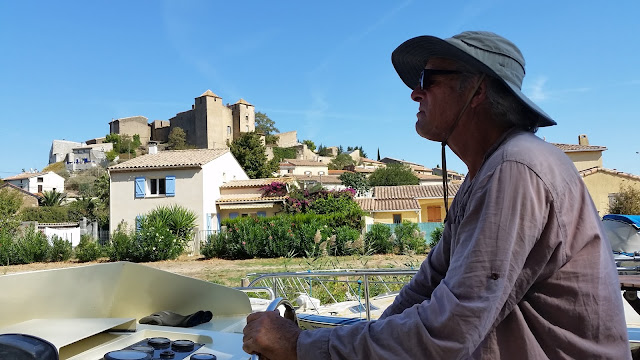 The first bridge, in Capestang, is one of the tightest on the canal.
How precise would our aim be going through it?

(And of course, Capestang being our main town, we know all sorts there.
Would we totally embarrass ourselves?)

We made it, but we DID scrape a corner of the bimini.

Adjustment #1: Lower it as LOW as we can get it.
Now we know.

But after the first bridge, all the 49 others went smoothly.

A lot of bridges are small.
Stone and hundreds of years old.
Often at an angle to the canal. 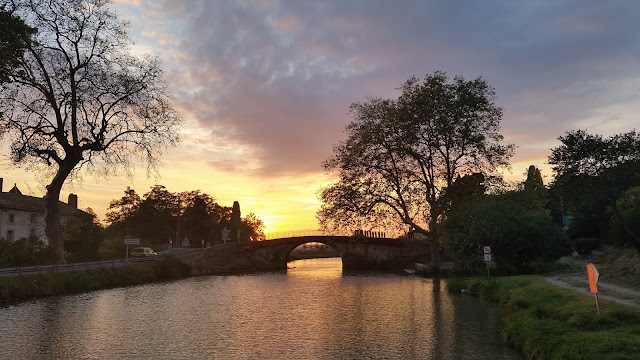 We practiced accurate mooring.
Stopping. Reversing in a straight line.
Making corrections.
Turning around in a narrow canal. 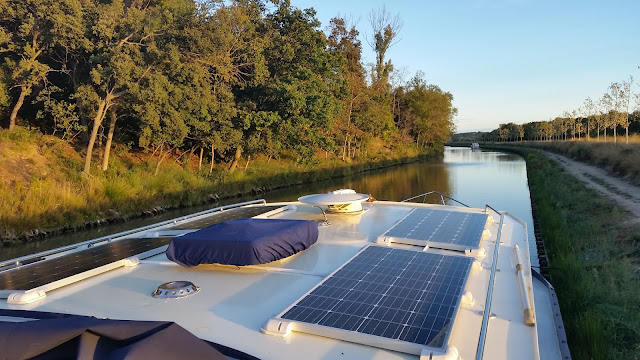 In the evenings, we moored between vineyards and fields.
(They call it "wild" mooring.)

(It WAS kind of wild, when Stan and the gangplank didn't agree at one point.
Good thing his shoes are waterproof.)

After our first day cruising, we noticed water in the engine room.
Where was it coming from?
Mystery.
Not a good one.

We mopped it up every morning.
(Too hot down there after the engine had been running all day-)
Hoping it didn't get any worse. 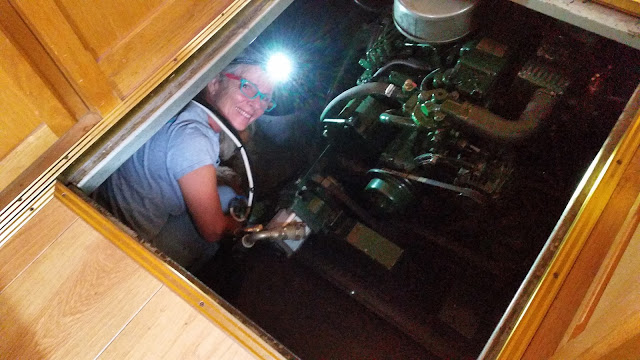 Then, we began going through the locks.

With only 2 of us, out of practice, going through a couple of the big locks was HARD work!
At one point, we had to enlist the help of 2 kids passing by on bikes. 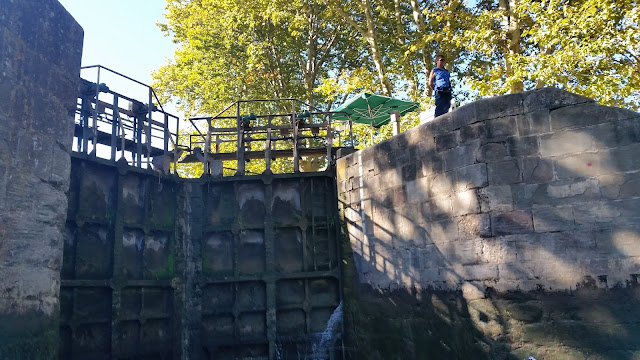 After the first one, the locks also went smoothly.
Slowly in - and slowly out - of them.

At one lock, the lock keeper told us there was an accident up ahead.
A rental boat had caught an edge and SUNK - in the lock.
They needed a crane to get it out.

So we moored overnight.
Waited for the backlog of boats to clear the following morning.
(Like everything else in France, the locks CLOSE for lunch.) 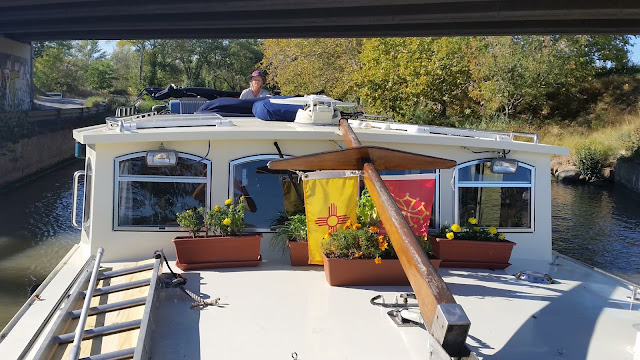 In summary, Maggie May handles well.
However, she doesn't make sudden changes.
She requires CONSTANT vigilance.
You have to plan your turns WELL in advance.

But: she's eminently manageable, once you get used to her. 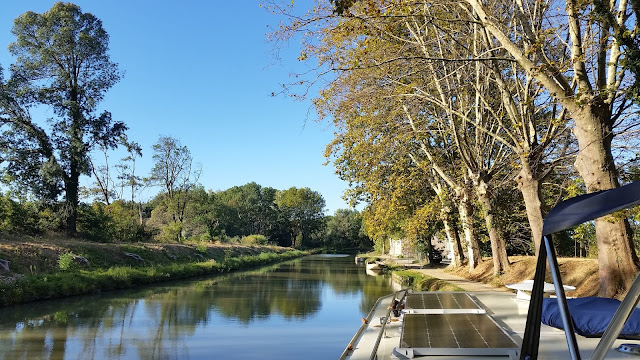 By the end of each day, we were sore and tired after hours of full concentration.
Avoiding reckless rental boats.
Securing moorings.
Managing locks and lines.

Learning all sorts of new stuff.

Yes, we had our usual wine with meals.
But - the emergency bottle of Armagnac that we brought along came in very handy.