Plan B - The Art House

We bought a house-!
In the south of France.
Bize-Minervois.
- In retrospect, that went fast. 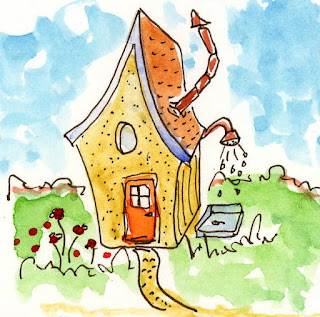 Last year, sitting on the aft deck of Maggie May - month after month, watching the world deal with covid, it was clear that travel - as a sort of lifestyle - was becoming less desirable.
We began to consider houses.
All over the world, in fact. 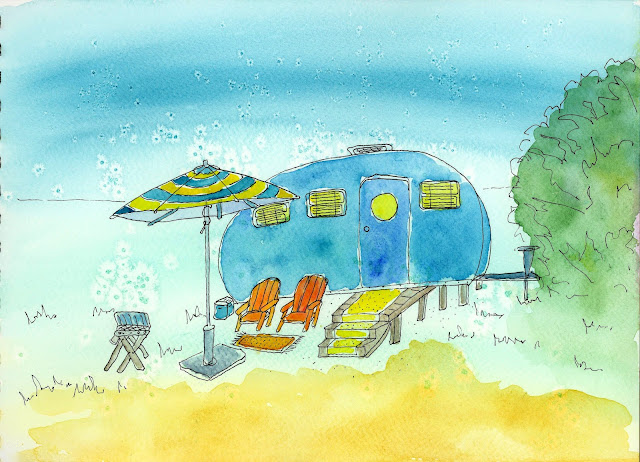 From Hawaii and Oregon to Laos and Thailand.
Back to New Mexico. Various Caribbean islands.
An old château. An olive farm. 500 year old stone houses.
Beach houses. Glass houses. Tree houses.
Eventually, we realized - we like it here.
The boat is here. We have friends here.
Why not - here? 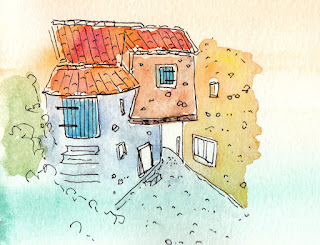 So I made a little book. (I'm always making books-)
I wanted to identify exactly which elements were important to us.
Which were "needs" and which were "wants". I was very specific. 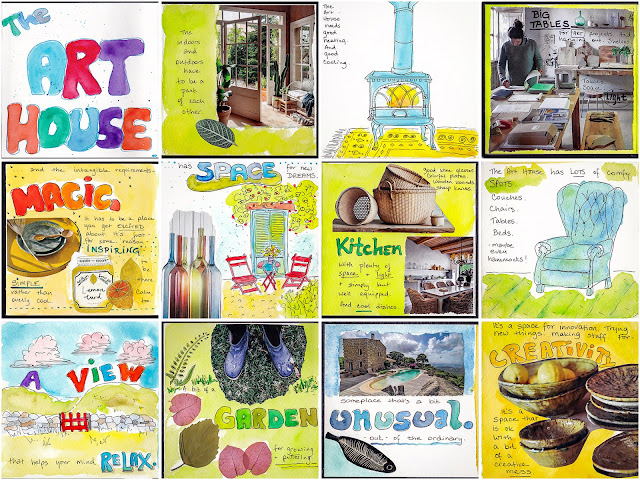 As usual, I had a list.
It took a LOT of searching - mostly online.
We almost gave up a few times.
But - it happened-!
Here's what it looks like: 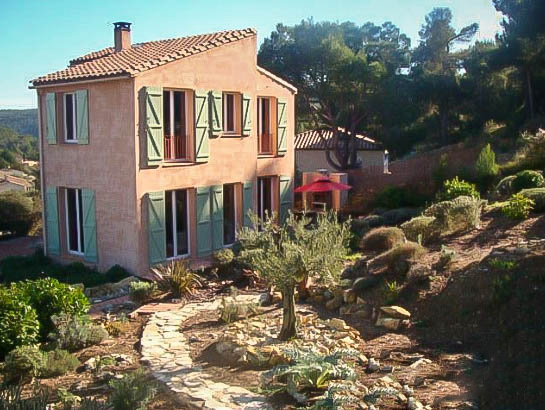 Even online, we fell in love with it.
It's easy. Simple. A bit quirky.
Unusual, but still - kinda French.
Just big enough.
But - there's space for a music studio for Stan - and an art studio for me.
Of course, compared to Maggie May, it's quite large.

It's about 20 minutes from the boat.
(Oddly, the boat has MUCH better storage! There are NO closets in this house.)
We're still in the south of France, between the Mediterranean and the Pyrenees. 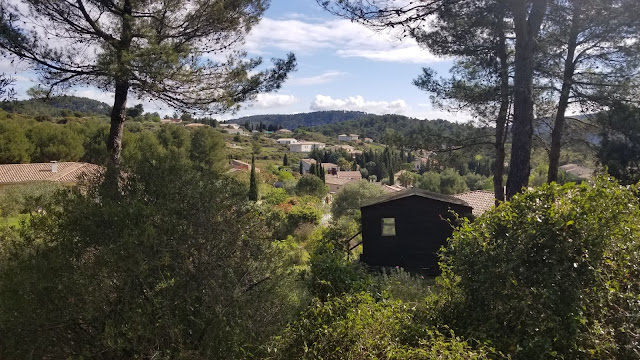 The area is beautiful.
Full of flowers and birds and markets.
Good food, good friends and wines.
We're on the edge of the village, just below a pine forest. 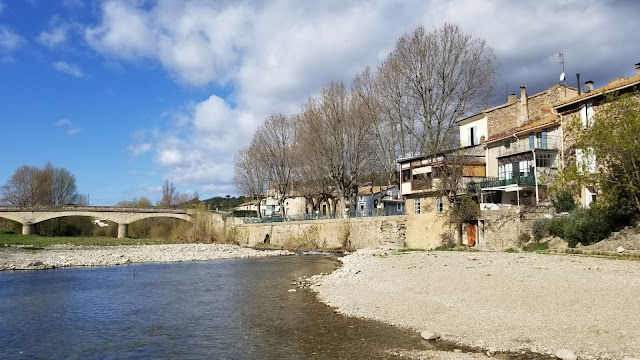 Bize is a great little village - we'd stayed here once before with the kids in 2014.
A river runs through the village.
The atmosphere is completely different from the Canal du Midi. 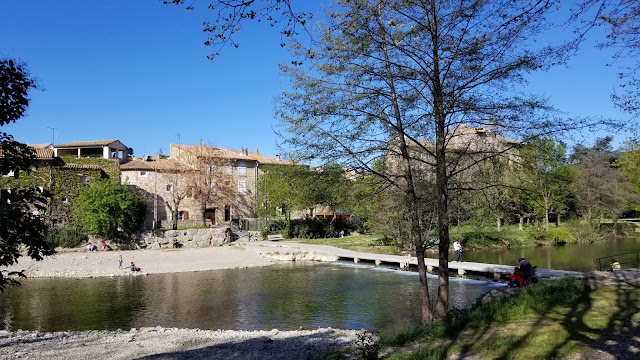 After signing the documents in December, we had to wait 3 MONTHS to get the keys.
We had NO furniture. No dishes, towels, linens, tools, containers.
No house stuff. Nada.
Starting again from scratch.
In March, we went into lockdown for the third time.
About the same time we got the keys to the house.
So glad we decided to get the house!
Stores were closed, but we could order things and have them delivered.
So - first thing we did was - put in a pool.
Yikes! What a project. In May.
Cranes and tractors and what a mess.
But - they started on Monday. By Friday - we had water in the pool. 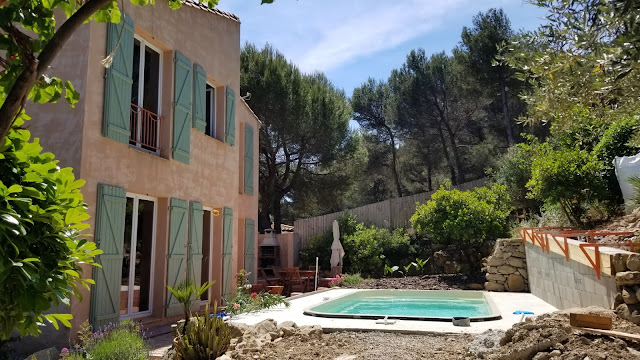 Okay, it's not really finished.
They're all booked up over summer, and will come back in autumn to make it look pretty.
Lay the stone surround. Finish the wall.
However, it's fully functional, if not super attractive yet.
It works. - And on hot days, man, it's great.
In the last few years, there were some VERY HOT days on the boat.
We DREAMED of - jumping into a pool.
Now we have one.
We're also gardening.
That was the main thing we missed on the boat during the confinement.
Not TV. Or a freezer. Not being on the grid. It was - puttering in a garden.
(Ice cubes came a close second.)
The soil here is absolute clay.
Terrible stuff and full of rocks!
(How do they grow anything here?)
But - plants seem to thrive. 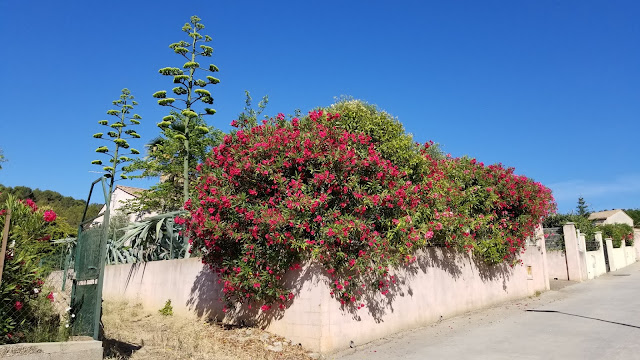 We even planted tomatoes in May.
By June, we were harvesting them!
Plus, in our garden, we have olive trees.
A plum tree.
An apple tree.
A loquat tree.
Blackberries.
Figs.
Even banana plants.
And a "strawberry tree".

And a cat - who seems to think he (she?) belongs here. 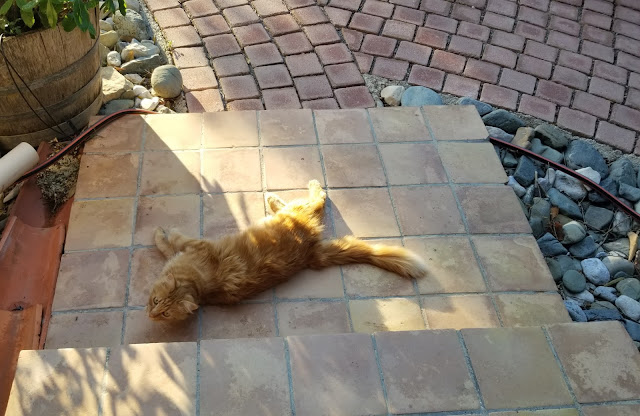 So - it looks like Plan B is working out just fine.
It usually does.
Again - we got lucky. 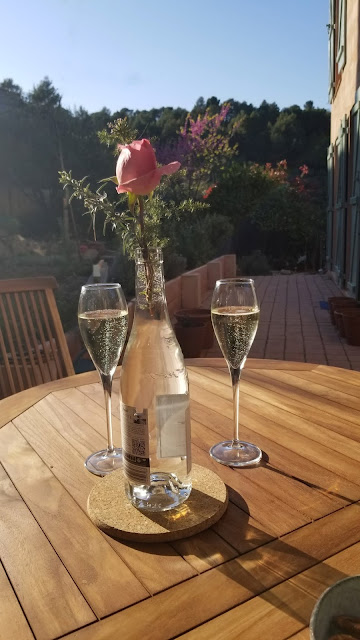