We are bruised, and sore, and tired, but - we actually did it! 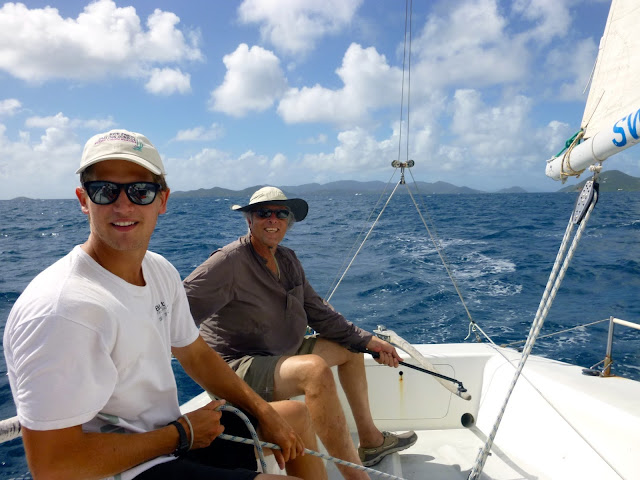 I think both of us were pretty nervous about the whole thing - and justifiably so.

It was physically demanding, out there on the “high seas”.
Winds 20-25 knots, waves, and us in a simple little 24’ boat, heeling like crazy.
Water nearly reaching the precarious edge of the boat.
No idea what we are supposed to be doing.

Our instructor was a young Swede named Tim.
He usually races big professional carbon-fiber boats.
He was perfectly at home in a sideways boat.
I was in a fair panic about holding the rudder, bouncing up and down and all around. 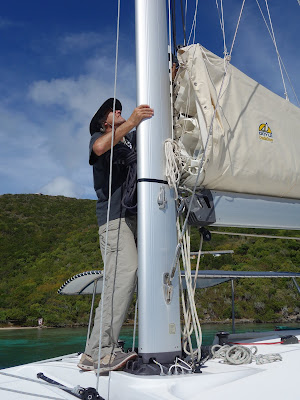 Stan and I hoisted the sails, climbing up on the cabin trunk.
We manned the sheets, the tiller, tacked and jibed and tacked again.
Each time scrambling from one side of the boat to the other, ducking under the boom.

We did 180’s and PIW (person in water) rescues.
We actually retrieved the fender (the fake man overboard) each time!
I didn’t think it could be done.

We rounded buoys, aimed for islands.
We would figure out how to get there, and what we needed to do.
It was up to us to set the course and take the necessary actions. 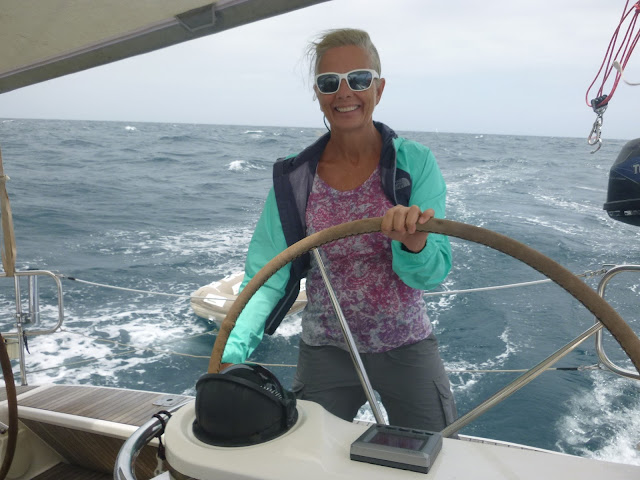 We docked at the fuel dock, on sail only.
We left the pier backwards, sailed (without an engine- this boat was sail power only) carefully between the mega catamarans.
- without incident.

Navigated the narrow harbor entrance coming and going several times.
Avoided several high-speed ferries and a tanker, and a number of motoring yachts.

We even brought the sailboat back and moored it beside another one, coming up perfectly parallel before we tied ours to it. All by sail power only.
We attached and raised the sails, took them down, and did all the necessary knots in the sails. 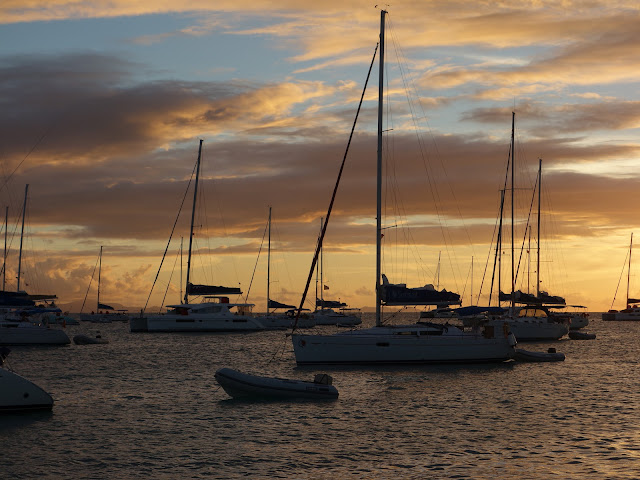 And now - we are physically and mentally beat.
What a workout!
I mean, even just climbing in and out of these small boats takes some thinking for us.

I was a bit worried before we started - we both were.
Were we up to this?
There were NO other small sailboats out between the islands.
Much less one with a 60 and 65 year old learning to sail.

Even this morning, we discussed it - we were both pretty apprehensive.
So last night, we were pretty beat.

We met the instructor on the 36’ monohull boat this morning.
We needed to learn about all the winches and sails.
It's the one we’re going to charter ourselves next week.

I thought: Yikes! How can Stan and I EVER hope to control this massive piece of equipment?
All by ourselves? And not kill ourselves and others in the process?

But the day went well, and we did a .
Tim gave us a pretty thorough workout.
Of course, he’s 28, fit, and he’s been sailing since he was 7.
He has no idea how clueless we are.
And how hard it is for us.

He just stands up in the steeply heeling boat, at what seems to us to be a death-defying 45 degree angle, calmly talking, while we are desperately trying to hold onto something and not fall out of the boat. Wow. 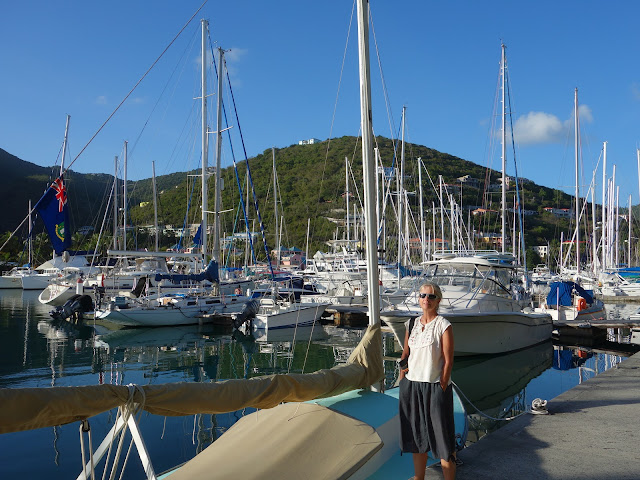 We tacked back and forth inside the marina, too - on sail alone.
Our small motor-less comparatively tiny boat -
- thru all these mega yachts and mega catamarans.
There's incredible wealth on display.

We didn't want to ruin anyone's paint job.
Or worse.

We were able to find our way thru them, as crowded as they were, without hitting anything.
That part was really easier than I expected. 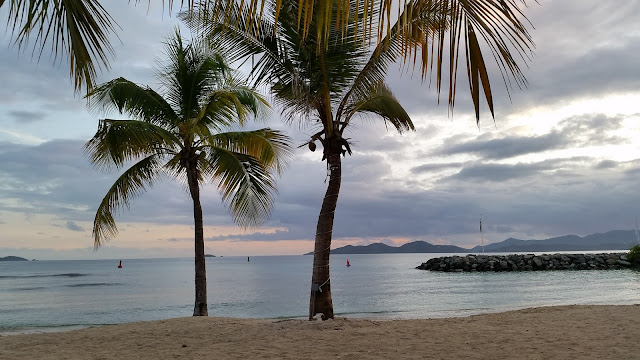 It was the heavy wind and waves and heeling that made me uncomfortable at first.
But soon I realized that the waves mean little - it is all more a question of wind.
I didn’t know that.

And knowing who has the right of way and how to avoid other boats.
What you’re supposed to do when 2 vessels come close to each other.

We met situations - and Tim would let us figure out how to get out of them on our own.
How to de-tangle a twisted jib, how to recover from a missed tack and an uncontrolled jibe.
We did a .

When we said good-bye to Tim, we were sweaty and salty and exhausted. 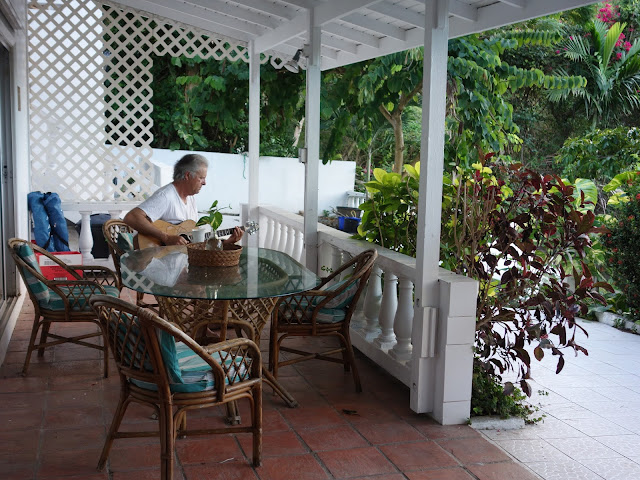 And so now we’re “home”, after negotiating the Tortola traffic, driving on the narrow roads, left-hand side, with the wheel on the American side, with crazies passing us on hairpin turns, up and down mountains, and having to maneuver, only an inch to spare, mirrors pulled in, thru the steep jungle road past another car, just to get to our place. *whew* 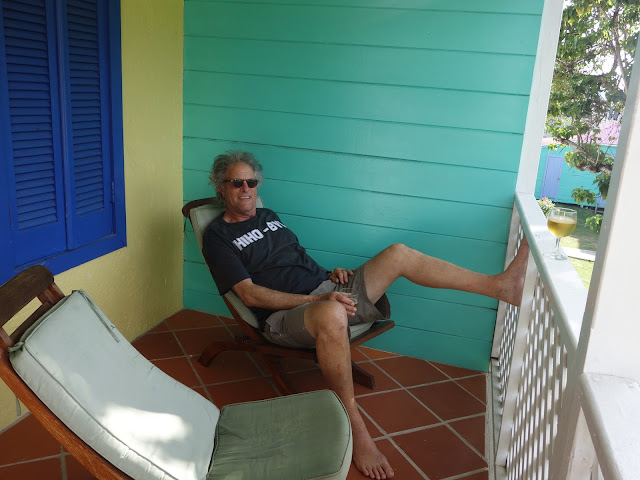 Stan is icing down his bruises.
They ARE rather stellar, blue-violet and red-violet, and huge.

I’m off to a hot shower.
Then a glass (probably we’ll finish the bottle) of rosé from (a find in the chandlery) and we’ll be in bed by 9, as usual. 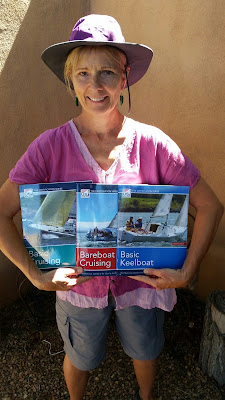 Here’s the weird part:
The exam is only required for people who want to charter boats.
(We hope to get our International License, which gives us the option to charter in other countries.) 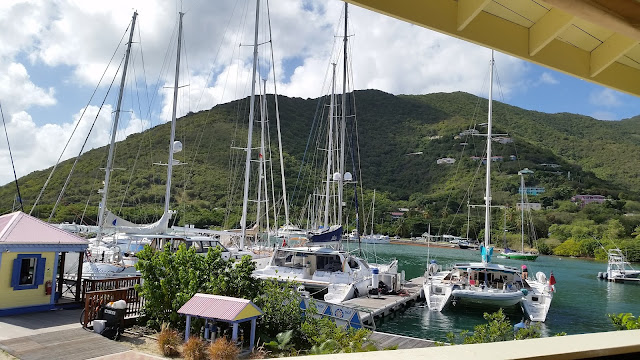 However:
If you BUY a boat - even a huge, 72’ mega-yacht with all the fancy instruments, gadgets and trimmings - there is no licensing requirement to drive the thing.
You can get out there and just - GO. 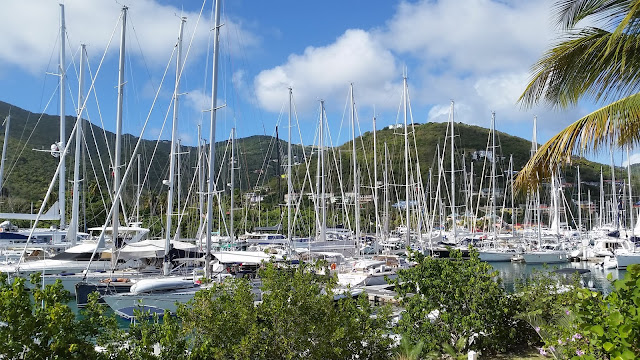 This is a rather scary thought.
There are a LOT of boats here.