We heard about this “Bamboo Train” outside Battambang in Cambodia.
“Ride the traditional train!”
So - we went.

I didn’t know what to expect, but - it wasn’t THIS.

This was the train.
The whole train.


A simple platform on two sets of wheels.
Tearing down the track with a local driver and an engine roaring behind us.

There are a number of these platforms, with other passengers.

When we encounter traffic on the tracks, we have to stop (not easy!).
Get off, LIFT the bamboo platform off the tracks.

Move the metal wheels (heavy!) off to the side.


Let the traffic go by.
Quickly.

Then we reassemble the “train” and continue.
Nothing holds the platform down but our weight.

Must of one of the most ridiculous (and dangerous!) things I’ve ever done.
Bamboo train, indeed.

And - there was that train in Myanmar that actually BOUNCED.
Really bounced.
How does that happen?

In Bangkok, the most common taxis are motorcycle taxis.
They congregate on street corners, waiting for clients.
You hop on the back, and off you go.

It’s easy to tell which ones are taxis - the drivers wear vests.
Of course, it helps to speak a little Thai.

Or - you can go in the relative comfort of a tuk-tuk.


Eventually, a tire was found and mounted.
Everyone pitched in.
The sadly shredded tire was squeezed into the hold with the luggage.

The journey continued.
It took 11 hours. 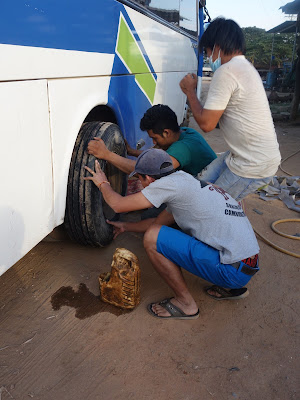 Motorcycles are attached to everything.
Trucks, sidecars, bicycles.
Families of 5 or 6, sometimes with an extra propane tank or a pig.
Sometimes both.

Everything goes on a motorcycle. 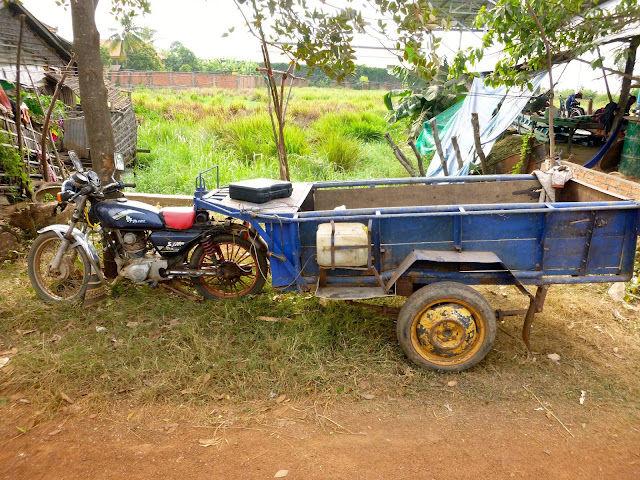 Taking a bus from Luang Prabang to Nong Khiew in Laos.
We were loaded into the back of a bus similar to the one below.

Luggage on the top.
Then a few more people. More luggage.
Everything strapped down by the barefoot guy on the roof.

The driver looks in and looks puzzled.
"Nong Khiew?" he asks. We nod.
"No! NOT Nong Khiew!" He points to another bus.

Everything is unloaded and repacked.
The barefoot guy has to strap everything down again.

(I didn't mind that much. My seat was more comfortable in bus number 2.) 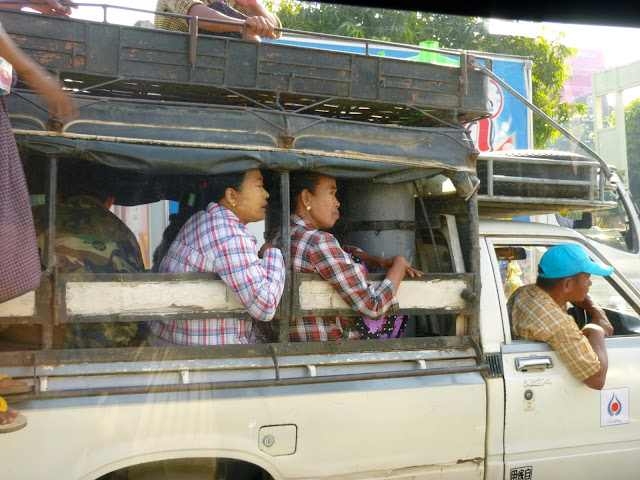 Stan inspects the stranger vehicles - and the repair shops - closely.
A lot of the parts and a lot of the tools themselves are handmade.

Usually, our transport consists of a tuk-tuk.
The 2-stroke engine sounds like that - tuk-tuk-tuk…

In fact, the most commonly heard phrase in perhaps ALL of Southeast Asia is the question,
“You need tuk-tuk?”
Taxis are (almost!) always available.

Horse taxis are less common.
And for good reason - those heavy wooden wheels without suspension are seriously uncomfortable.

Those early travelers of long ago were tough.

The photo below is poor, but it’s one of most bizarre things I’ve seen.

A man was unloading fish from his car at a market.

The trunk was FILLED with fish.
Big fish. No containers, just - fish.

I watched, wondering how he’d ever get the smell out of the car after that load.

Then, as I walked past the car, I realized that it wasn’t just the truck of the car that was full of fish. The ENTIRE CAR was absolutely crammed to the gills, so to speak, with fish.

There was a small space left for the driver.

Here, our taxi waits for us after a night of music on the town
(Stan playing guitar with some of the locals - great stuff-).

This old “Chinese Buffalo” made a LOT of noise.
I think walking might have been faster.

I won’t begin to cover BOATS in this post.
Except for this one.

The kid and his mom in the boat. 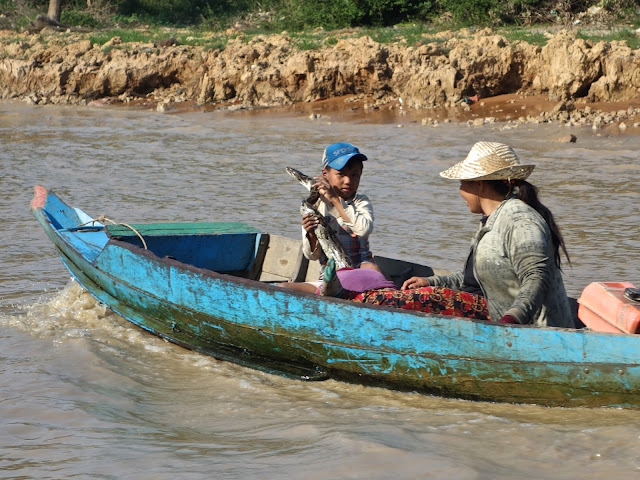 And - taxi to the next adventure?
In a tuk-tuk. 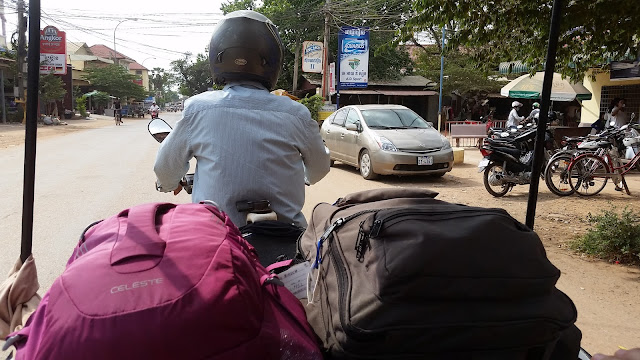