Well, that’s the first time we’ve rented a place where - if you sit on the toilet, you’re in the rain. 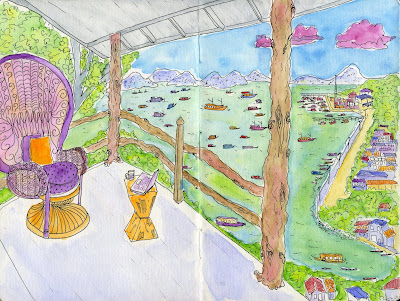 For good measure, the toilet is placed just beneath the runoff from the roof of the bungalow. Even with the umbrella that we’ve carefully placed by the bathroom door, it's difficult to stay dry.

A tropical bathroom shower in the rain - is pretty standard.

But - what if you have to spend a little TIME on the potty?

The rain doesn’t mess around here, either.

It comes down with intense tropical enthusiasm. 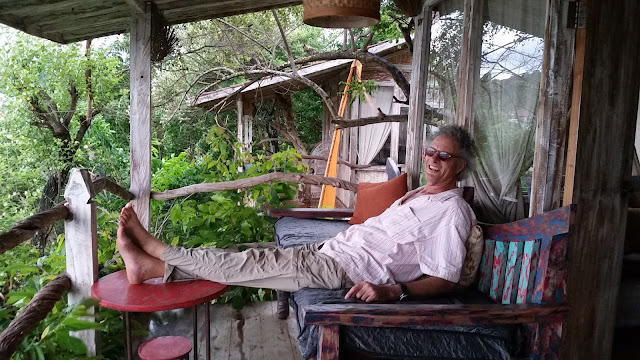 The place we’re staying in is quirky. In a good way.
Most unusual. Kind of a tree house.

Up a narrow stone path and a slippery muddy trail, between rocks so tight that Stan had to turn sideways to get through. And this - after the taxi dumped us off on a side road god knows where. In the pouring rain. 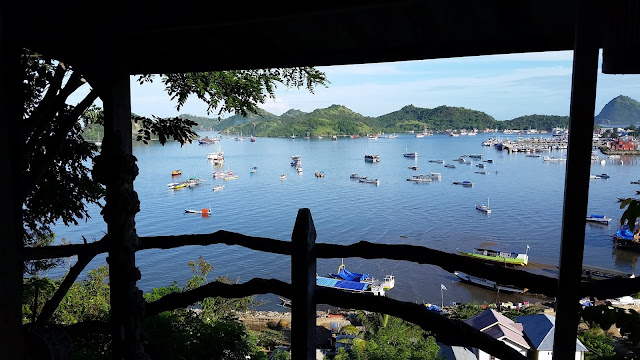 But the place has a great balcony.
I keep thinking - where the heck ARE we?
I think we're the only ones here.

Watching the scene below.

Pretty pleased with our choice of being on the hill. 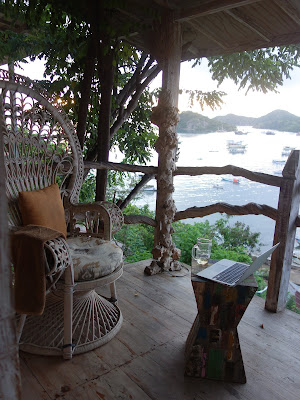 I’m overlooking the city of Labuan Bajo.
The port. On the edge of the island of Flores, Indonesia. Ships and containers. Tin roofs and the blinking lights of boats in the harbor. It's a working town. 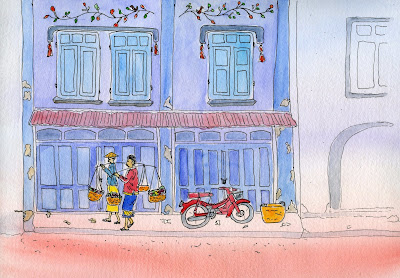 When it’s not raining, sounds of an impromptu soccer game, occasionally hammering from the boatbuilders. Roosters. Motorcycles and the sound of a van backing up. A bandsaw and a power drill. More laughing from the gang watching the soccer match. 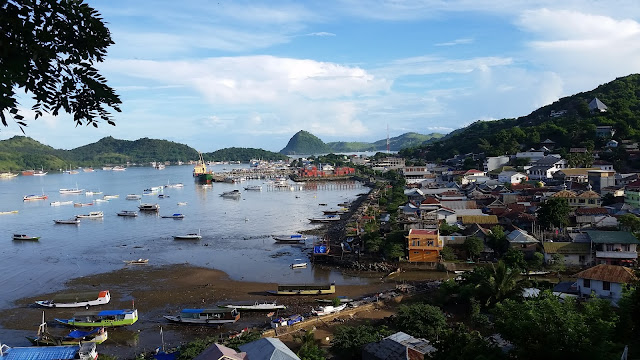 All sounds of a regular city, doing the things they do everyday.

Lots of cool old wooden boats.
Fishermen, construction, mosques - and the occasional small dive shop.
The diving, however - is awesome.

Sharks and rays and turtles and corals and seahorses - SO much to see.
It's a wonder world. We spend a LOT of time underwater.
Then, when someone mentioned we could go snorkeling with giant manta rays - and see giant bats, we signed up. We didn't realize we'd be stopping to see Komodo dragons, too. 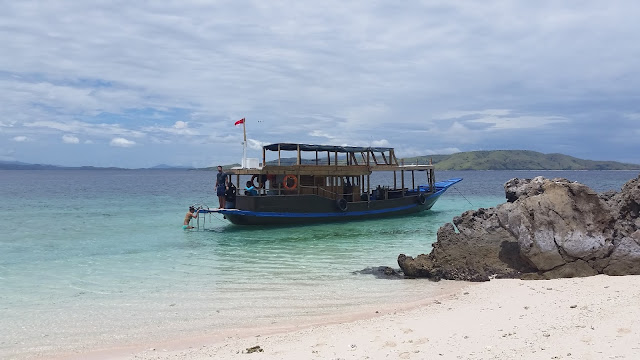 There weren't a lot of takers on the trip.
A lovely old wooden Phinisi boat. 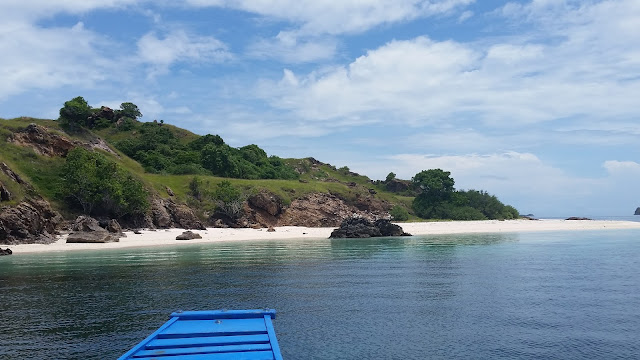 Over 10,000 of the 17,000 islands in Indonesia are uninhabited.
Even with the inhabited ones, transport between the islands is NOT straightforward.
(I looked into going to Raja Ampat and the Banda Islands. The best I could find was 39 hours, with 6 transfers to get there from here! All - within Indonesia.) 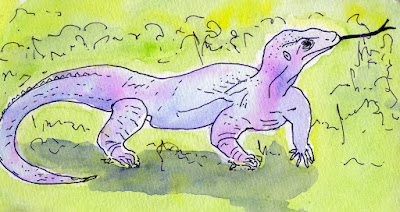 But - back to the Komodo dragons. 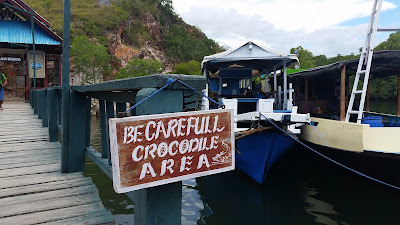 When we get off the boat, we see this sign.
Crocodiles? - As if Komodo dragons aren't enough.
These guys are dangerous. Shark-like teeth.
Their saliva is saturated with toxins. There's no anti-venom.
And - they're cranky.
On the island, Komodo dragons are just - lying around.
On trails. Under laundry lines.
We had to be accompanied by a local guy with a big stick.
I can't believe people just - live casually around them.
Plus, Komodo is home to poisonous snakes.
Vipers, kraits, and cobras.
Pythons, too.
Unbelievably, they allow camping here.
-Really. 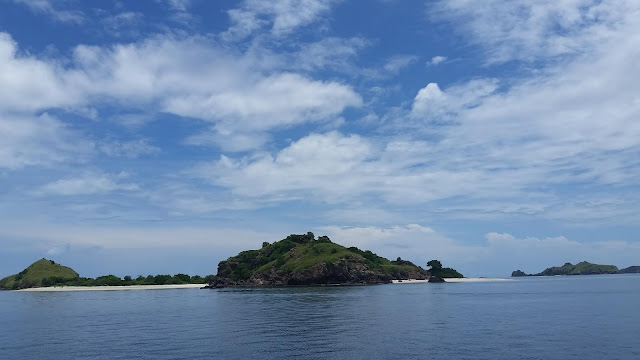 Then: GIANT MANTA RAYS:
At "Manta Point", the waters between the islands churned and swirled. You could FEEL and SEE the currents working beneath the surface. It was impressive. Saw dolphins jumping along the way - all day…and sea eagles. 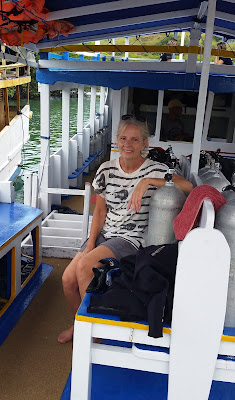 Snorkeling gear on, jumped IN at Manta Point, where the waters swirl around a rock - creating a sort of jet stream for fish and plankton. We were flowing WITH the strong current, and the mantas came towards us, huge mouths wide open, feeding on plankton.

They are HUGE - 2-3 meters across. Their mouths are wide open, feeding on all the little creatures and plankton floating swiftly by us.

Something I’ve never seen before, even though we have seen mantas in other places. The water was chilly, but - we were too busy watching all the mantas to care.

WAY cool. I was totally impressed.

This alone was worth coming for.

Just before sunset, we anchor off a mangrove island.
Around us, hills and islands, green humps in the water, as far as we can see.
No lights.
Just hanging out. 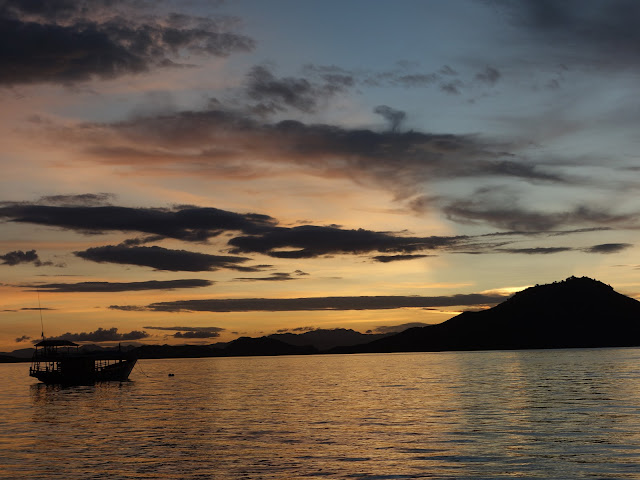 As the sun went down, thousands of giant bats begin to appear.

Over a meter across, coming out of the jungle, flying slowly over our heads, into the night sky. They flew in front of the setting sun, and the rising moon, and all looked like miniature "Batman" signs - so much larger than any I’ve ever seen before. 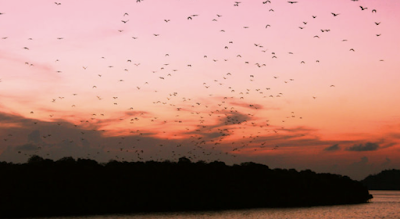 Slowly, thousands and thousands of enormous bats. They're fruit bats. Flying foxes. They come out of the mangroves and head for night feeding on Flores Island. Every evening.
It felt like a classic scene from a low-budget horror film. 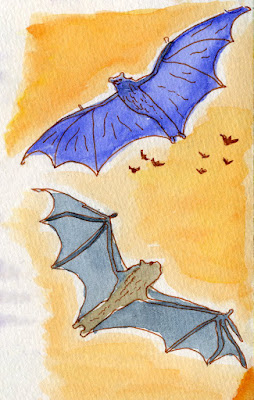 And then - we head home to Labuan Bajo.
In the dark.
With no lights.
The captain says he keeps everything dark so he can see the smaller boats - also with no lights - by the light of the moon. Lovely.

Can’t ask for much more than that.

Some day all of this will all be very popular, but for now, it's pretty low key.
It's not easy to get here. It's hot. And accommodations are - interesting. 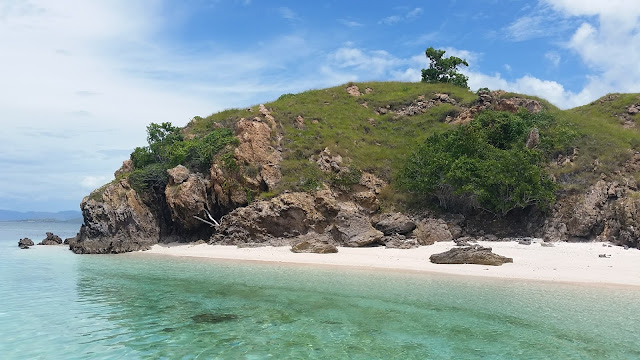 KANAWA
Back in town, we found a small desk in a closet-sized office that advertised stays on an island called Kanawa. No idea. We couldn't find anything about it, but - we went. 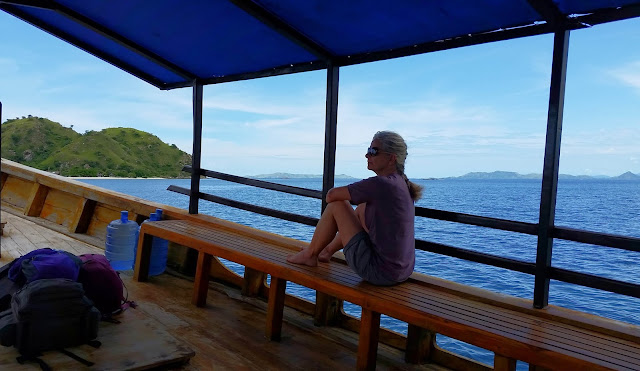 SO glad we took the chance!
A small wooden boat picked us up with our packs. En route, there was engine trouble, and both the captain and first mate dived in to sort it out, leaving just us on the boat. 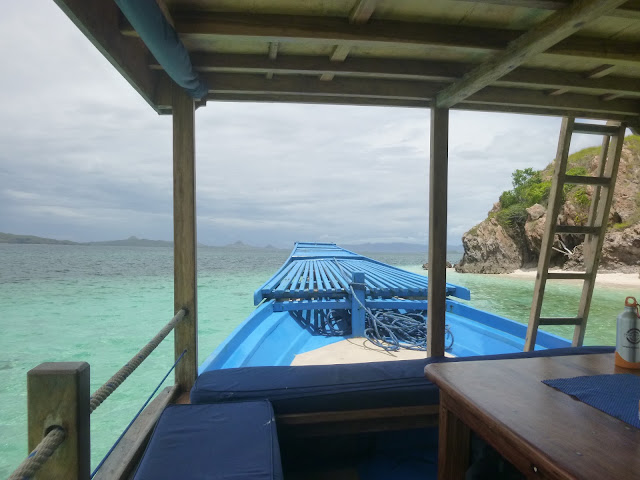 Kanawa is tiny.
Simple wooden cottages for rent - no electricity on the island.
And a simple restaurant.
But the best snorkeling I've ever come across. 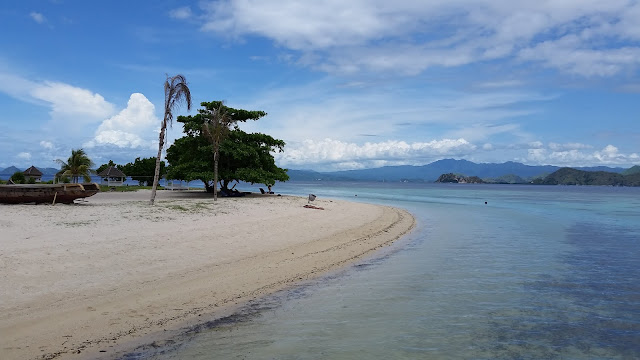 Right from the deserted beach - or from the handmade jetty. 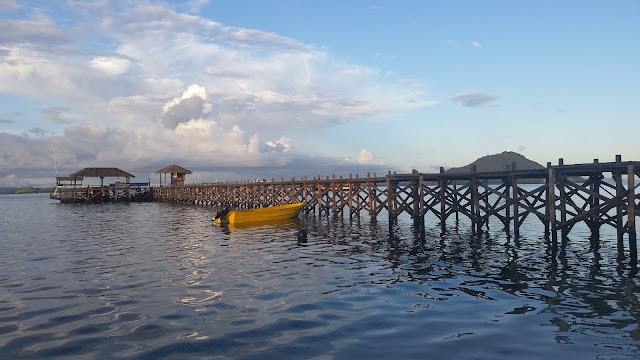 The place is so ridiculously laid-back and relaxed. 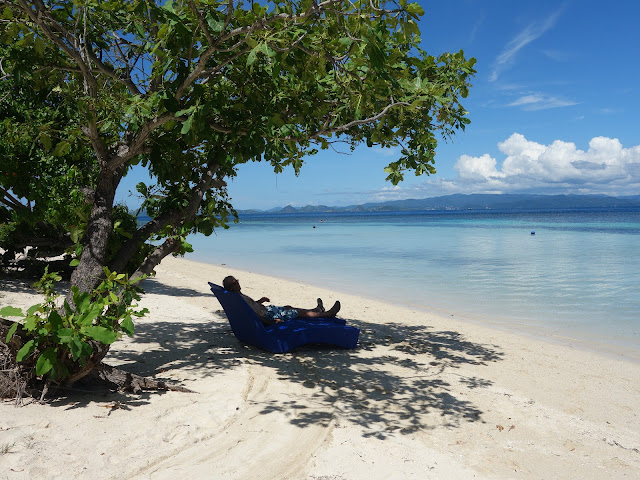 The weather not as hot as I’d feared. Without electricity, there were no fans.

Yes, the nights were a bit heavy and still under the mosquito netting, but - worth it. 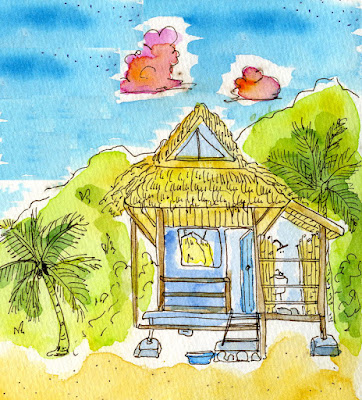 I snorkeled every few hours, and loved it. 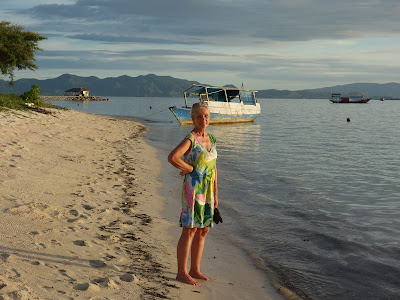 We saw our first sting ray before we even got off the boat. Underwater was even better. Small black-tip sharks, a wonderful octopus, large cuttlefish, great healthy coral formations, fish of all shapes and colors - I’d go back again.

There were about 6-12 of us on the island at different times, coming and going.

It was such a relaxed atmosphere, you couldn’t help talking to everyone. 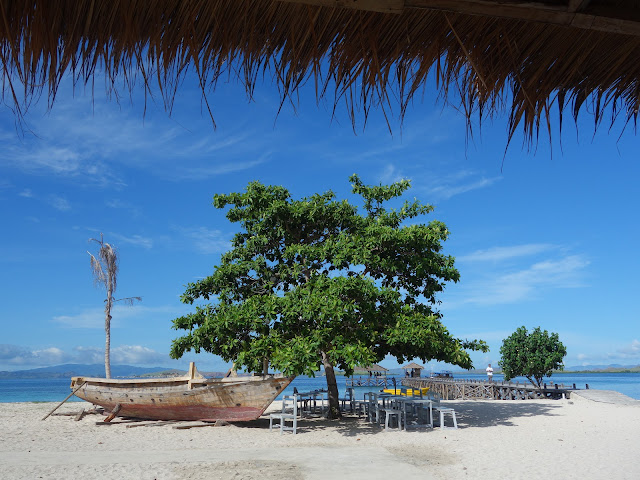 To use a trite phrase: Awesome. 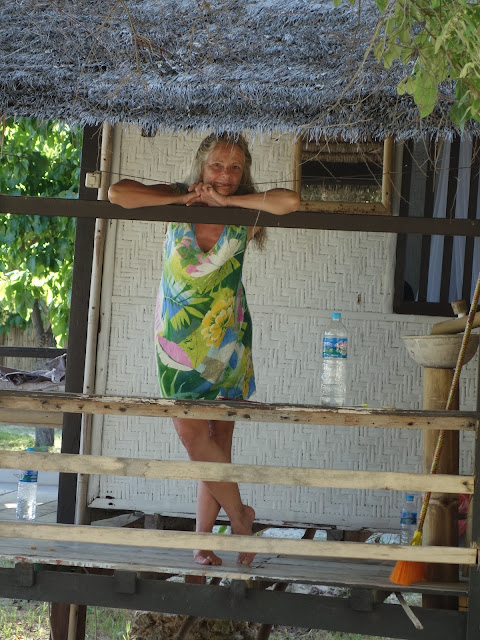 "Traveling seems to be me to be a profitable exercise.
The soul is continuously stimulated by noticing new and different things."
- Montaigne (French philosopher, 1500's) 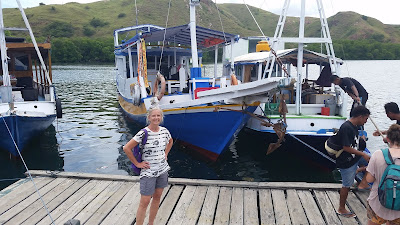 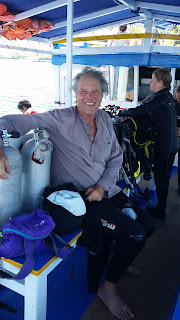 "Ideally, I would capture the ounce of magic that exists in every moment."
Posted by Trisha Ray
Email ThisBlogThis!Share to TwitterShare to FacebookShare to Pinterest
Newer Post Older Post Home