View on website.
Once, when I was working for Pan Am in Liberia, in the west of Africa,
we lost a monkey in an airplane.

We found the cage.
It was empty.
We took that plane apart - but - never found the monkey.

For years afterwards, if things went wrong at the airfield, we blamed it on that missing monkey:
"Missing supplies? Probably that monkey."
"No radio contact? Monkey probably ate through the wires."

The monkey was easy to blame.
Everyone saved face.
There was a small zoo in Monrovia, the capital and main city of Liberia.
There were pygmy hippos, snakes, ant bears, parrots - and 3 mischievous chimps.
One day, one of the chimps got out of his cage.
He began running through the small zoo, opening cages and letting the other animals out.
He was all excited, having a great ol' time.
As the chimp approached the leopard cage, we all held our breath.
But chimps aren't stupid.
He didn't open THAT cage.
Instead, he jumped up on the top of the enclosure.
He just - walked around, driving the leopard inside crazy. 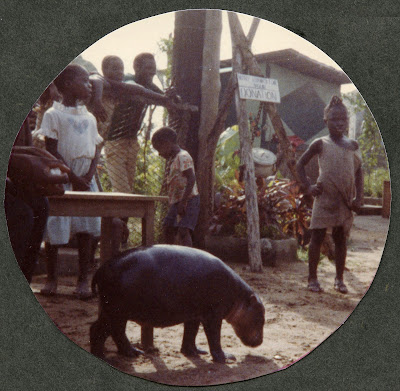 These days, with covid, those episodes come to mind.
Sometimes, things are just not entirely within our control.
Once we understand that - it makes things easier.
How to deal with a virus?
Lockdowns? Schools closed?
What about visits to old people?
Mental health issues?
Travel restrictions?
Who knows?
Sometimes there aren't any real good answers.

Our job right now?
Staying in good spirits for those around us.
And - the third African monkey story:
We were sailing our small catamaran
(possibly the ONLY catamaran in the entire country of Liberia at the time)
in a lagoon near a place called Monkey Island.
We were watching the flocks of birds. Underfoot, dozens of sting rays.
On one pass, sailing near the island, the boat got stuck on a sand bar.
Stopped.
The chimps - big ones this time - began to wade into the water and head for our boat.
Dealing with monkeys - is ALWAYS trouble.
You never know WHAT they'll do.
Kind of like djinns.
Maybe - a virus, too.