Down to Toothbrush and a Credit Card: USA to Europe without Flying

New Mexico to the South of France
by Train and Ship 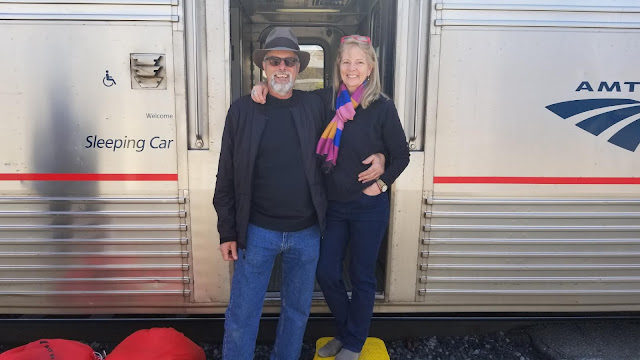 We just crossed over the Missouri River.
On a train.

We have a small sleeper compartment.
Private bathroom.


All meals are included on the 28 hour train trip from Albuquerque to Chicago.

The attendant brings tea to our compartment between meals.
Makes up the beds. 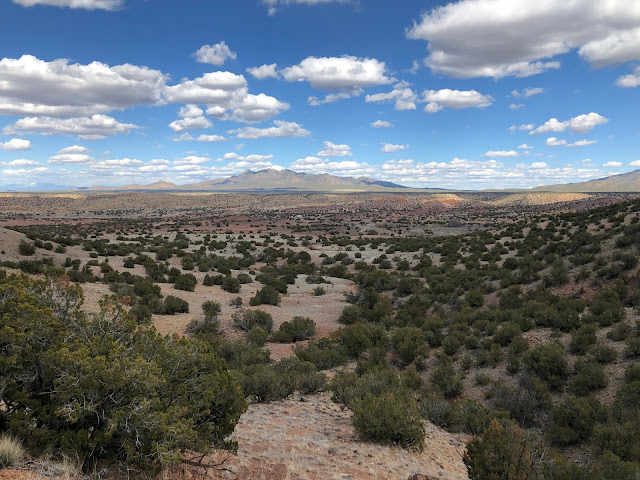 We weren't necessarily being "carbon conscious" by not flying.
I had retina surgery. Wasn't allowed to fly.

Okay, I thought - fine.
There has to be another way to get to France.
And - there is.

A pretty cool way, too.

Booked an Amtrak train from Albuquerque to Chicago.
Overnight.
Another one from Chicago to New York.
Also overnight.


Then, the Queen Mary.
New York to Southhampton in England.

It takes a week.

From there, Eurostar train London to Paris.
Under the English Channel.

And on by train to Béziers and "Maggie May". 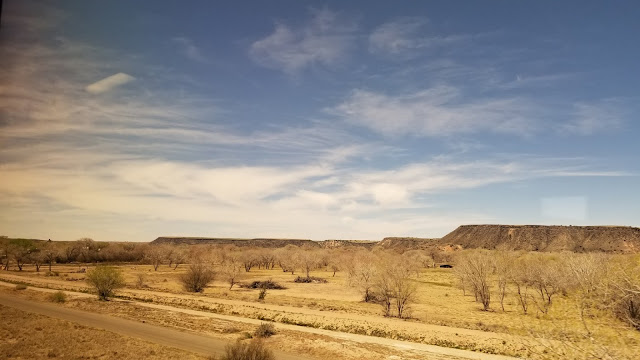 The entire transit took about 3 weeks.
No jet lag.
Arrived relaxed and rested.

Even got to see a show in London on the way.

But back to the trip:

(Did you know - the Santa Fe Railway never went to Santa Fe.
The terrain was too tough. So it stopped in nearby Lamy.)

Crossing a small corner of Iowa.
Into Illinois.
Fields and farms and quiet towns. 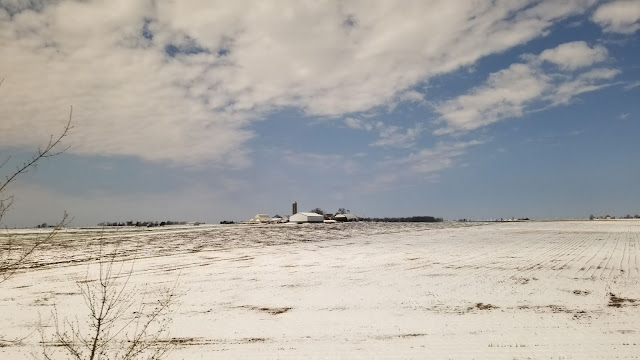 Over the Mississippi River.
Lots of water up here.
Still snow in some places!

Looks like it was a wet and wild winter in the Midwest. 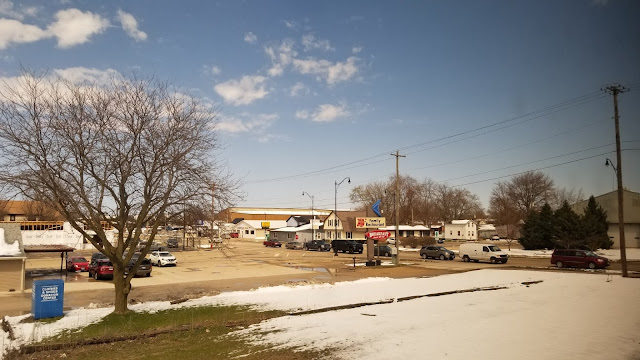 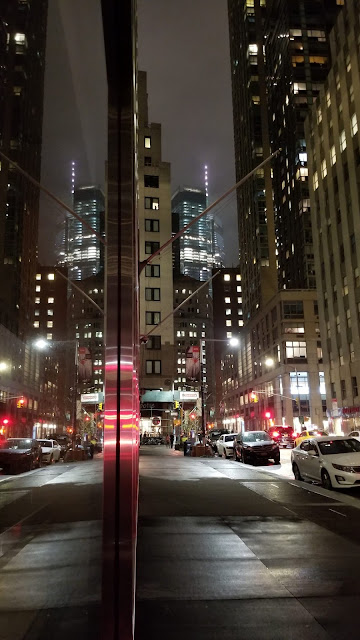 One of the better world-class cities.
A bit unsung. 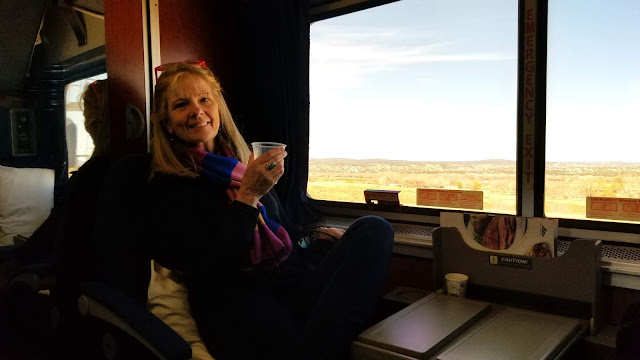 During the previous 5 months, we sold our house in New Mexico.
And a rental house or two.

Even gave the cat to the neighbor.
(Cat is probably happier now)

The goal was to get rid of everything.
Aiming toward a "toothbrush and a credit card" life.

Lightening the load a bit. 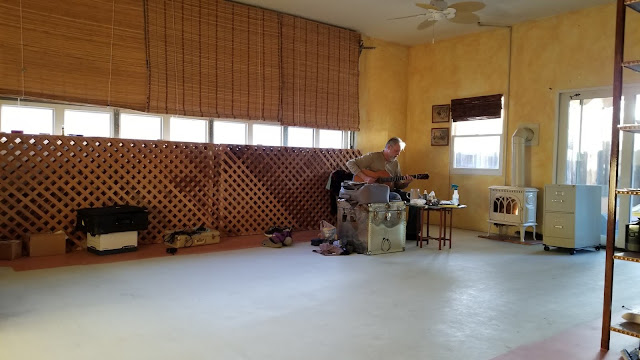 Not just downsizing. Everything. Gone.
After that job, (and it was HARD!) this long slow trip was welcome.

From Chicago, another train.

Along the edges of Lake Michigan and Lake Erie.
Past Buffalo, where my Dad was born in 1910.

The Queen Mary II is our next step.
For the transatlantic portion of our trip back to France. 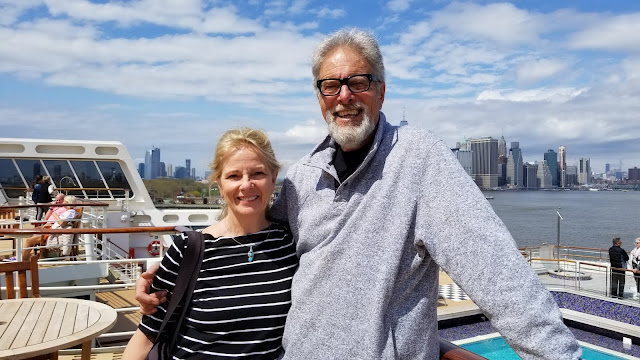 Always wanted to take the Queen Mary.
It's not a cruise ship, it's an ocean liner.

Transport, rather than entertainment.

Between New York and Southhampton, UK.

And: It IS beautiful.
Luxurious.
Spacious.
Elegant. 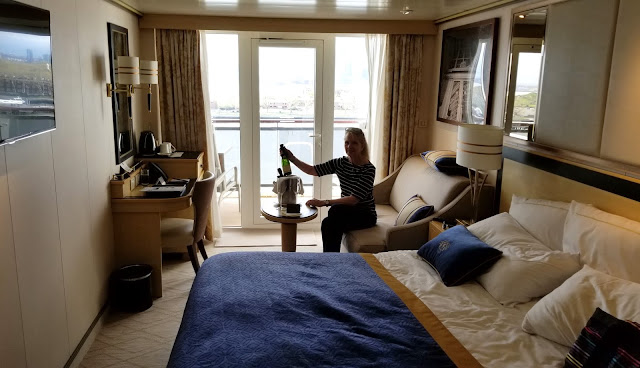 Our stateroom has loads of space.

Even a fridge.
An electric kettle.
A private balcony.

With a complimentary bottle of champagne.

Turn down service.
With chocolates.

Evenings are quite formal - most men in tuxedos, most women in sparkly dresses.
Lots of ballroom dancing.
Live music in the evenings. 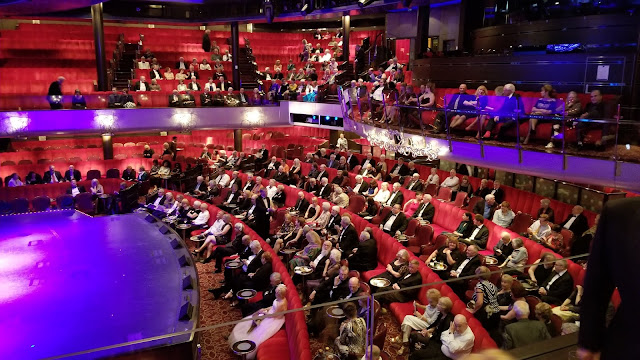 You can go to the buffet or the pub if you want to stay casual.
Otherwise, evening attire is expected. 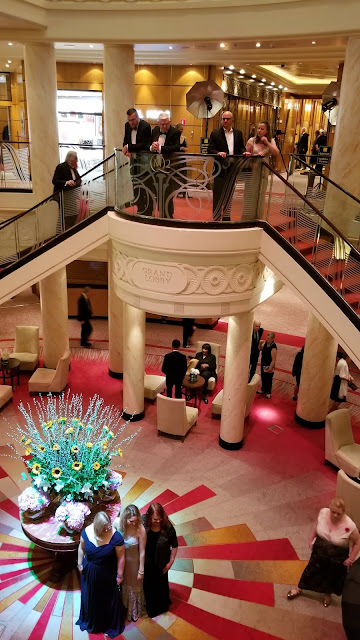 The ship's library is the largest afloat - it's impressive.

Stan is still happy.
He's got his guitar and a view. 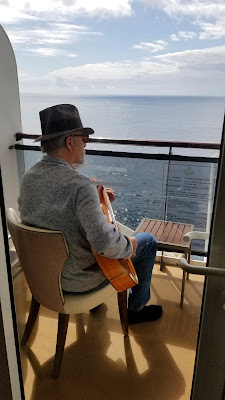 (I thought this might be some sort of modern art sculpture.
Turns out it's a spare propeller blade. Yikes.) 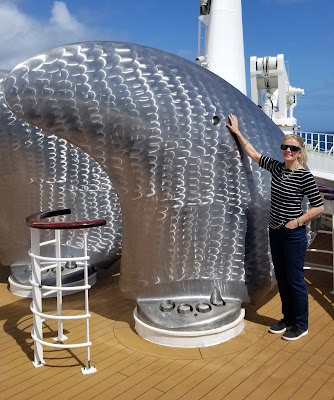 I love just watching the ocean slide by.
No responsibilities.

Being amazed that there is NOTHING around us.
In any direction.
Just water.

(Ok, maybe an iceberg or two up by Labrador.)

And we have so little idea of what is UNDER the water out here. 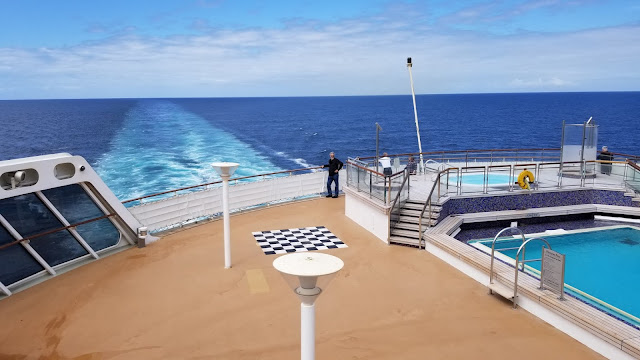 After 7 nights' crossing, London-!
We find last minute tickets to a West End show.
Go out for a fancy dinner after.

TGV (the Train of Great Speed) from London to Paris.
The Eurostar.
Upstairs.
Quiet.

Under the English Channel.
Fast.

Change stations in Paris.
Passing over the Seine.

Through the fields and villages of France .
Way down to the south. 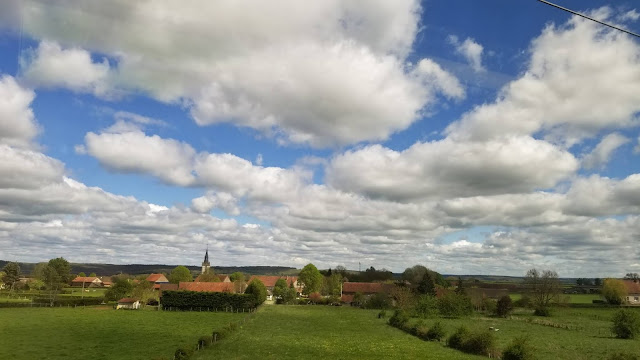 To Béziers overnight, before returning to the boat. 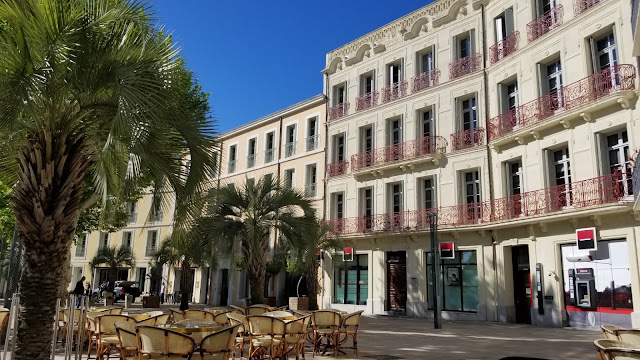 Then - finally, after a trip that took us 3 weeks:

It's time to open the champagne. 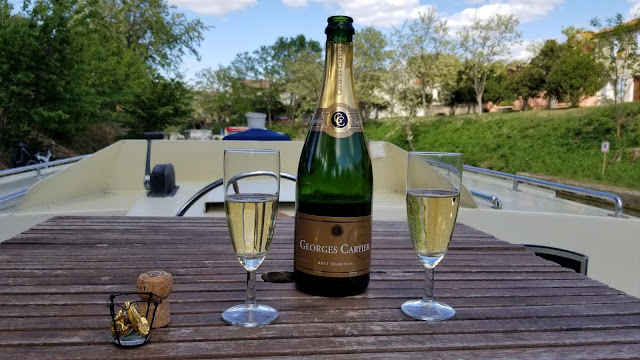