Haiti has been in the news recently.
A country with a particularly difficult history - looks set for more of same.
However, I have a special place in my heart for Haiti. 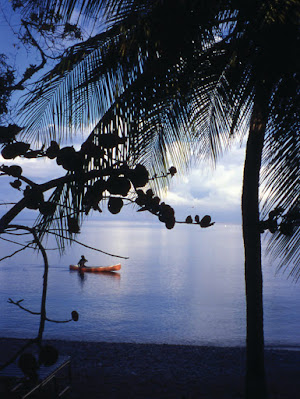 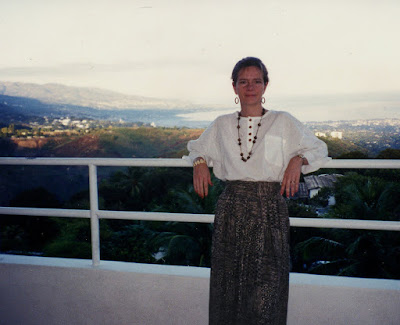 I'd met a couple of Haitians at a trade show in San Francisco.
My company was known for creating unusual contemporary rugs. Rugs made out of jean selvages, leather, cork labels, sisal, recycled silk saris --- we were probably the most innovative rug company in the US - maybe anywhere - at the time.
So - my partner Wolfgang and I went to Haiti. 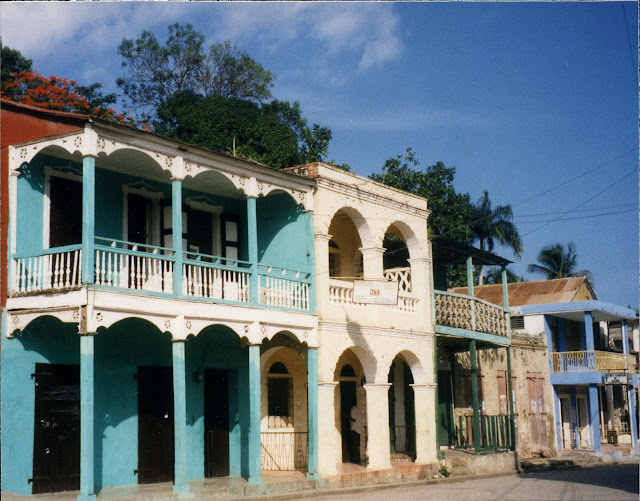 Brainstormed with the Haitians.

What local material could we find in Haiti - and how could we make rugs out of it?
How could we create something - special? 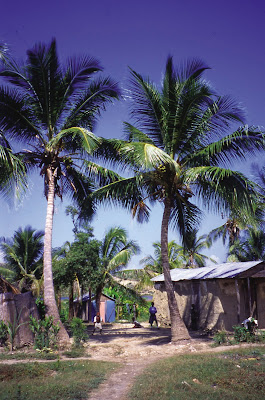 We found it.
We called it "banana bark".
Which is of course ridiculous, since banana plants don't have bark.
When one banana plant produces fruit, it dies, and another plant comes out of the ground.
They're more of a grass than a tree. Technically, they're an herb.
Whatever their classification, Haiti has plenty of them.
Expired banana plants. 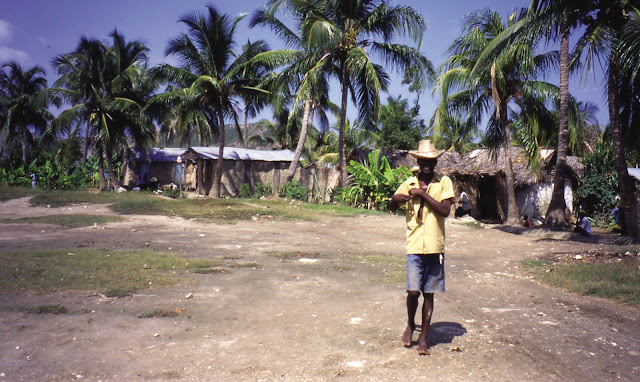 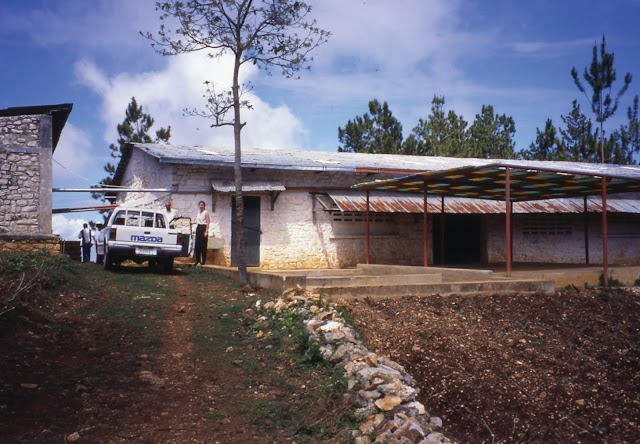 We found an old textile plant.
The looms were still in there, unused for years.
We got permission to refurbish the looms and rent the space. 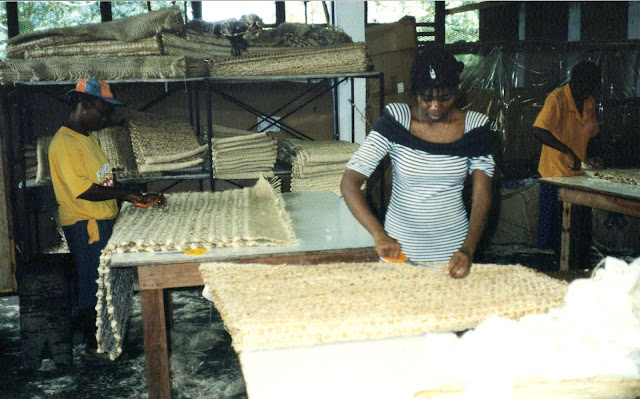 We began experimenting with weaving the 'banana bark'.
It was possible. 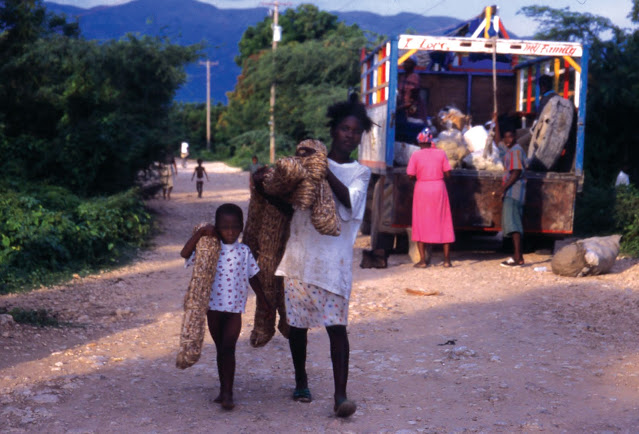 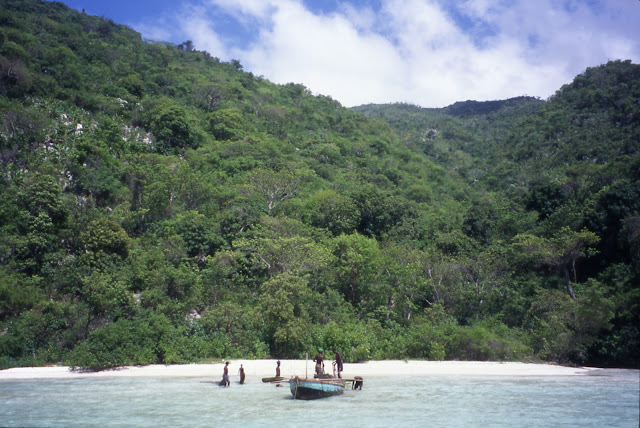 They were paid - on the spot - by the kilo.
This was very popular. 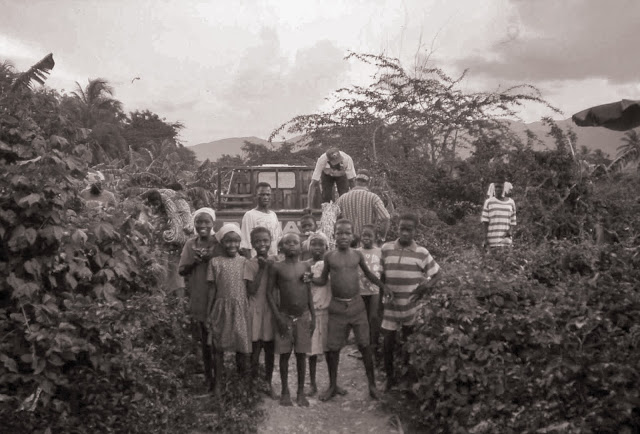 Just getting the truck up there was surprisingly difficult.
We began weaving.
It took a lot of trial and error.
We were all learning together.
Everything had to be hand-finished.
We added a bit of imported New Zealand wool to make it a little more interesting. 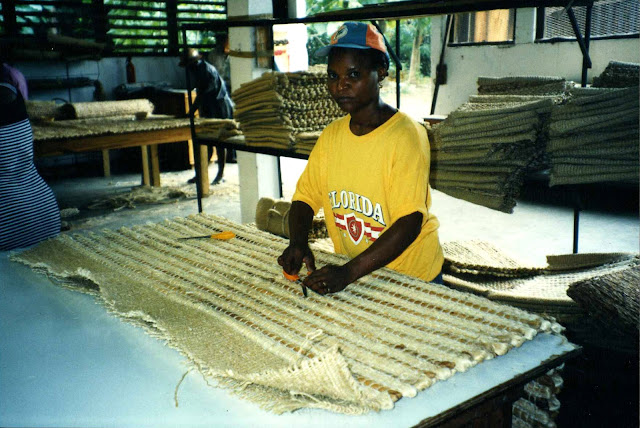 Then, of course, we had to import them into the US.
And warehouse them.
But - they were COOL
Thick, luxurious natural rugs.
In several styles and sizes. 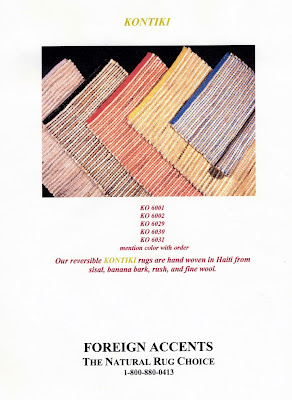 We called them "KONTIKI". 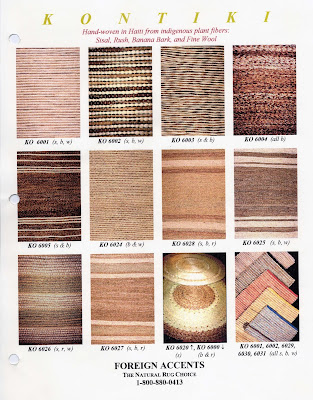 All made from - natural waste materials, more or less.
"Biomass", as my neighbor called it.
They sold like hotcakes.
Not in the discount stores, either. They were a high-end item. Our customers were upper-end furniture stores, like Neiman Marcus in New York.
Soon, they were a success story - and we were supporting over 400 Haitians.
It also gave us a reason to visit a beautiful - if extremely poor - island. 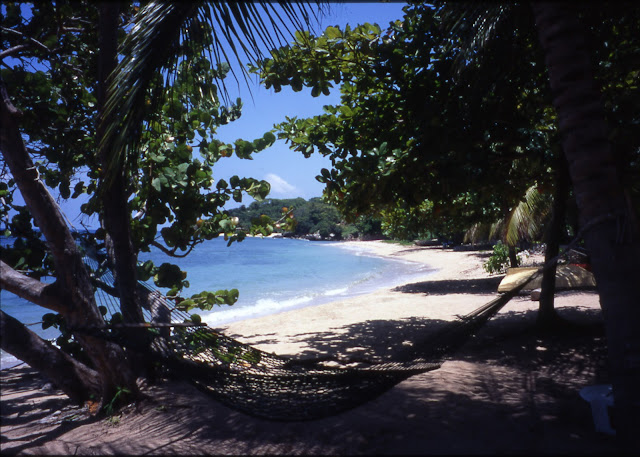 On one visit, we went to the local church (our 3 Haitian partners, who owned a company called "Universal Hands", all went to the same church.)
One woman took my hands in hers and said, "Thank you, sister. For what you have done."
One of those moments - mildly embarrassing and very touching - at the same time. 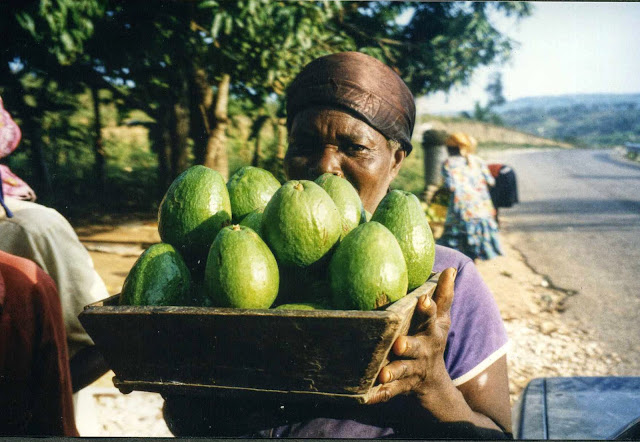 A friend of ours, Lawrence Peabody,
- "of the Boston Peabodys", he told me (?) -
was one of our designers. 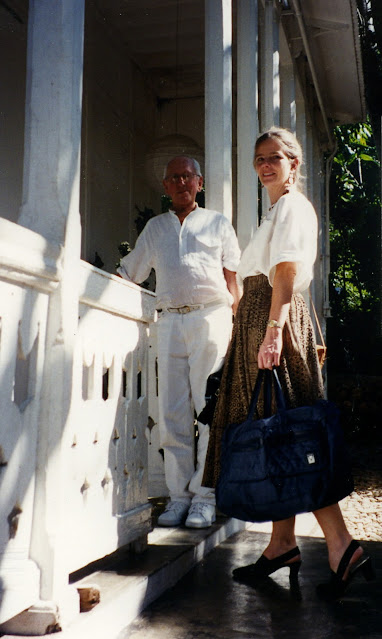 He also had a home in Haiti.
A splendid tropical home, filled with art. 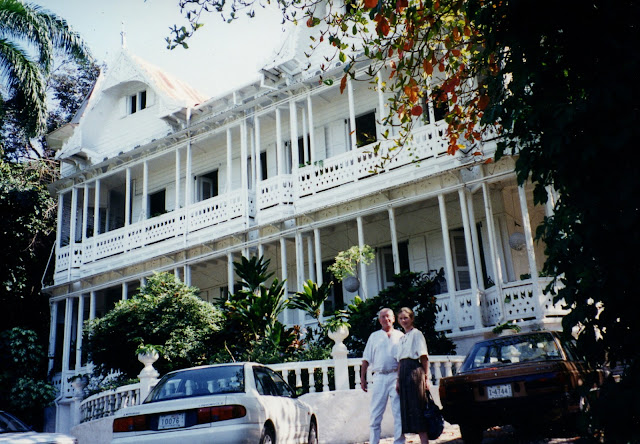 One evening, Lawrence invited us to his house for dinner - with the American ambassador at the time, William Swing. Strangely, I knew him. He had also been US Ambassador to Liberia when I lived there in the 1980's. He was brought in just after the Liberian Revolution. (I thought he was probably a good man in difficult countries. Plus he spoke fluent French and German.)
An unlikely and odd coincidence. 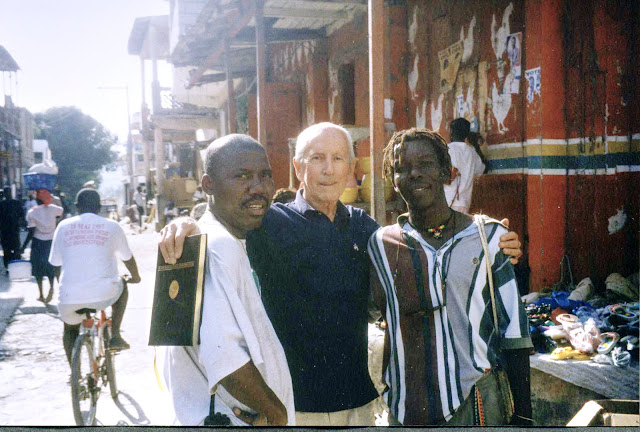 Anyway, the rugs were a success.
The whole process was intriguing.
Haiti reminded me a bit of Liberia.
Almost as chaotic.
In fact, maybe even worse. 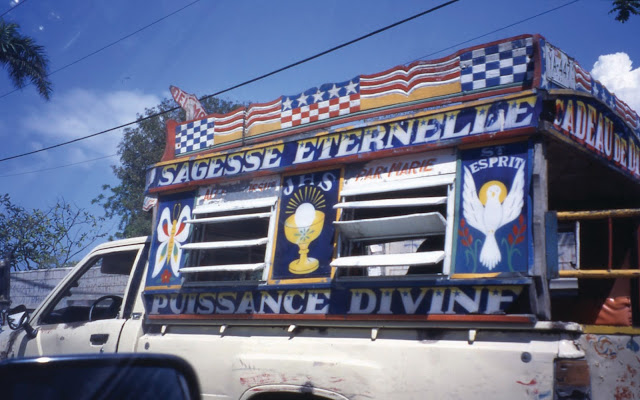 Even after living 4 years in Liberia, West Africa, the amount of disorder in Haiti was impressive.
Mountains of trash lined the incredibly pot-holed streets.
The trash collectors were on strike, protesting the government.
The pavements were so broken they weren't just uncomfortable, they were completely impassable. Traffic was ridiculous. Solid.
Our partners used shortwave radios and walkie-talkies to communicate with each other - which roads were passable, which weren't.
It was during the time of the 'handover' from Cédras to Aristide and his party. Public opinion was bitterly divided on it. Voodoo - which is recognized as a religion in Haiti - was a strong factor in the 'return' of Aristide.
Meanwhile, nothing worked.
No phones, sporadic electricity, little power. 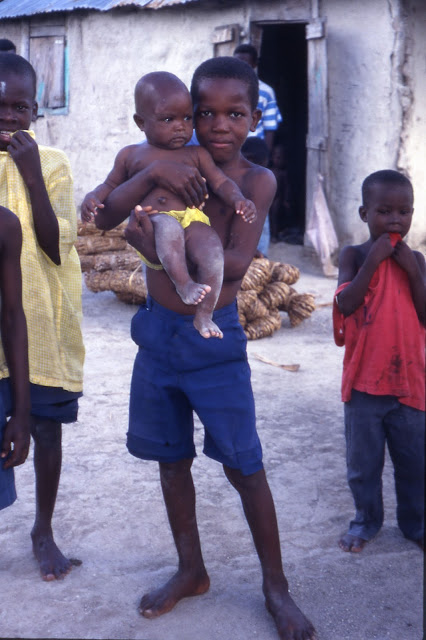 If political turmoil wasn't enough, Haiti has frequent hurricanes.
Plus, in 2010, there was a massive and devastating 7.0 earthquake.
Then - cholera. And more hurricanes.
And yet - some of the most original art anywhere is found there. Painting, metal sculpture - wood work - Original, colorful - and full of story and life. 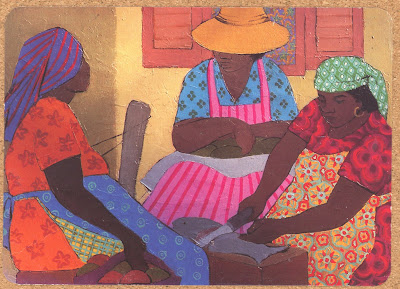 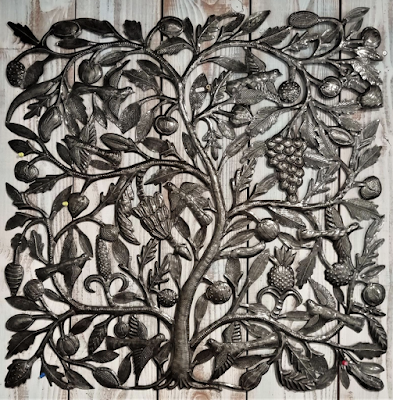 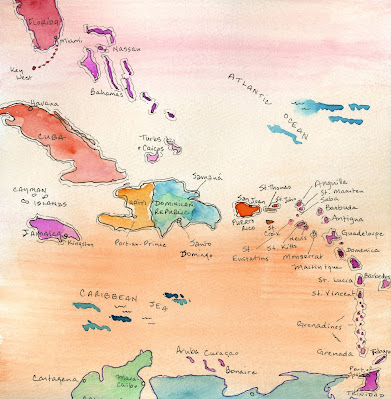 So - another episode in a special island country.
Glad I had the opportunity to experience working there. 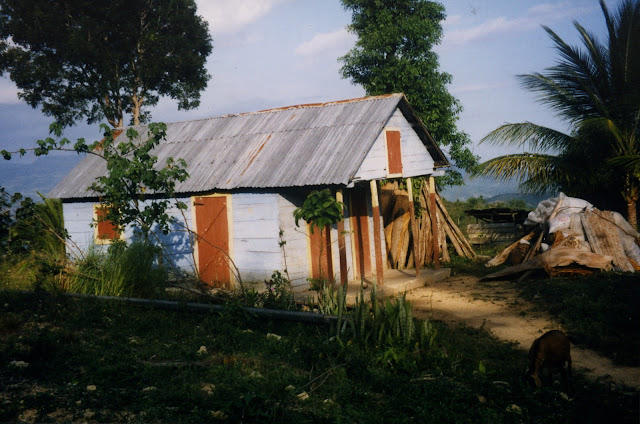 Wishing them all the best -  - from the bottom of my heart - with their next episode. 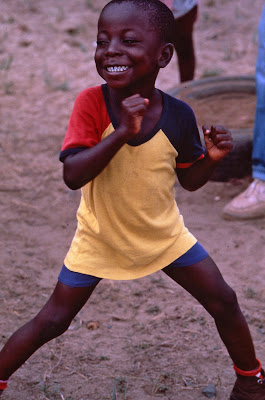